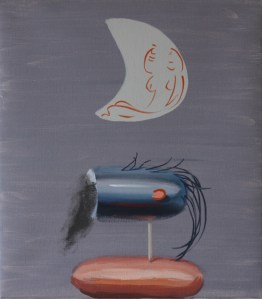 Imagine walking into a costume party inside Alberto Giacometti’s sculpture The Palace at 4 a.m. The theme to this group show is the brief but influential, pre-Surrealist “Pittura Metafisica” movement, and the decorations are meticulous. The room is divided in two by Adam Putnam’s untitled colonnade of 12-foot-high arches. But their unpainted plywood piers and careful but incomplete cardboard crowns make a porous enough impression to leave the gallery’s halves suggestively indistinct. Setting the tone when you first walk in is Kristen Jensen’s Blushing Rock, a roughly shaped piece of white porcelain stained with peach and gray wash. It could almost be a phoenix’s egg, the skull of a woman asleep on her side, or a Brancusi, but it prefers instead to stop short of terminal specificity and float in the undifferentiated power of allusion. Three brown oil paintings by Jesse Chapman get at the peculiar power of dreams to separate the sensation of meaning from any static content. In The Figureheads, four figures float just above the surface of a misty green swamp, against a sky the color of mustard gas. (It’s like the memory of a premonition.) Their features are worn away, and three of them are missing their arms, but their mottled, woody surfaces evoke the unspoken promise of early spring. Trailing down from each figure’s right leg is a deep canoe, its color dark and unbroken. Jill Mason’s oils, in a brighter palette of blues and pinks, also converge figures for uncertain purposes, but she comes at this prewar uncanny valley from the opposite direction: instead of Mr. Chapman’s people, which look uneasily like things, Ms. Mason has objects that wink and vamp like people. Three lovely untitled casts by Jennifer Paige Cohen use stucco, plaster, and fragments of clothing to recreate the impression made in the world by other people’s shoulders and knees. (Through June 9, 2013)