Austrian artist Otto Mühl, who helped found the aggressively provocative Viennese Actionist movement in 1960s, died on Sunday in Portugal. He was 87, and had been living with Parkinson’s Disease and heart problems for years.

Along with artists like Günter Brus and Hermann Nitsch, Mr. Mühl pioneered a brand of happening that used everything from paint and plaster to blood, feces and animal organs. It stretched the freewheeling developments of action painting and performance art into ritualistic, Bacchanalian displays.

In 1970, he founded a commune in Austria that at its height in the 1980s had two locations and some 800 adherents, according to the Austrian Independent. (Thanks to Artforum for pointing us to the article.)

In 1991, the artist was convicted of “sexual offenses, indecency with minors, rape, abuse of drugs and influencing witnesses,” according to the AI, and served almost seven years in prison. After being released, he lived on a commune in Portugal. 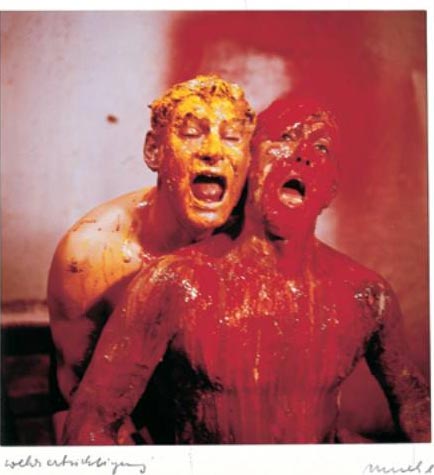