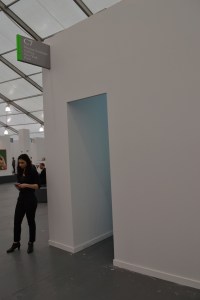 Though it’s hard to measure this sort of thing, I would hazard that the most-talked-about piece at the preview of Frieze New York yesterday was Tino Sehgal’s work at Marian Goodman’s booth, Ann Lee (2011).

I’m hesitant to relay what happens inside the empty little room set aside for the piece. In certain very rare instances, when dealing with art that is intensely unusual and strange and beautiful, one simply doesn’t want to ruin it with words. “Just go see!” everyone kept saying yesterday, excitedly, nervously, to those who had not yet been.

So yes, go see the piece, but if you must, or if you won’t be able to make it to Frieze, read on. The work is so strong that the short explanation below will do no real damage to your experience.

I entered the fluorescent-lit room around noon, when the fair was still relatively relaxed. A young girl in a teal shirt and Air Jordans, maybe eight or nine, stood there, looking straight ahead. A young woman was watching her.

“There were two artists—Pierre and Philippe,” the girl said slowly and confidently, gazing from one of us to the other. She had an otherworldly presence, as if she were speaking from some very nearby dimension, just out of reach. “They were nice, and they seemed very busy.”

She was referring to Pierre Huyghe and Philippe Parreno who a few years back purchased a readymade manga character to use as material for their art. She had taken on the role of that avatar, and talked about working with them and other artists—some busy, some less so.

Looking up toward the young woman, she said in the same calm tone, “Can I ask you a question? Would you rather feel too busy, or not busy enough?”

“Because not busy enough is boring.”

She told a story about visiting the home of Mr. Sehgal—also very busy as he talked on the phone—and finding a quotation in a book, which she recited. (Meanwhile, two people stepped into the room, made concerned looks and quickly backed out.)

“I’m not sure what it means. Do you know what it means?” Two quick embarrassed head shakes from her audience.

“I can repeat it for you,” she said warmly.

She marched across the room, arms slightly akimbo, and repeated herself: “Thus we ask now: even if the old rootedness is being lost in this age, may not a new ground and foundation be granted again, a foundation and ground out of which human’s nature and all their works can form in a new way even in the technological age?”

She looked at us, and waited a few seconds for an answer. “Okay, take care,” she said, and walked out, disappearing around a corner.

A quick Google search revealed it was a slight rewording of a snippet from Heidegger.

I suspect this all may sound a bit pretentious, even preachy (a tone that Mr. Sehgal’s can sometimes veer into), but it’s not. In large part that’s because of the preternatural performance of the girl—a number of girls take turns; I’ve heard they’re all brilliant—but it’s also because of how loose and playful the piece feels, how Mr. Sehgal self deprecatingly writes himself in the story of its construction and how his feints at transparency—she explains how this all came about—are always tempered by doses of mystery—how do different answers alter the script, and is it possible to take over the conversation?

In a fair housing thousands of pieces of art, much of it slick, shiny and largely indistinguishable—one dealer likened the fair to a solo show to me, which seems only a slight exaggeration—it’s a joy to be in a room with no objects, with just a single person offering up a tricky, tantalizing little question. The girl is open to all sorts of different answers but completely content to go on without them, like any great work of art.

For the past day, that Heidegger line has been stuck in my head, and depending on what I’ve been thinking about beforehand, it reads with different mixtures of horror and hope.