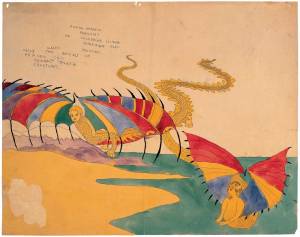 A mid-20th-century Henry Darger from the museum’s collection. (Courtesy AFAM)

The show, which will include more than 100 pieces from the museum’s permanent collection, will open at its current home at Lincoln Center next May and then travel to five other cities. Hopefully some people who see the show will consider making some donations to the museum.

Thanks to ArtsBeat for tipping us off to the news.