The state’s top Senate lawmaker, Senate President Steve Sweeney, introduced Booker to the stage in at a catering hall in Deptford Township to announce Booker has the backing of South Jersey Democratic elected officials.

“I wish them all well, but no one comes close to Cory,” said Sweeney, referring to Booker’s contenders in the upcoming August primary for filling the federal seat formally held by the late Sen. Frank Lautenberg.

The primary is less than two months away as Booker vies for the nomination against U.S. Reps. Frank Pallone (D-6) and Rush Holt (D-12) and Assembly Speaker Sheila Oliver.

Booker, speaking to a crowd of about 50 people, touched on familiar talking points since recently launching his senatorial bid – including bringing a bipartisan approach to Washington politics. The mayor of New Jersey’s most populated city said he was thrilled to receive the endorsements of some of the state’s most influential lawmakers.

“I’ve been in politics for 15 years and never dreamed a day like this would come,” said Booker, standing between Sweeney and Assemblyman Lou Greenwald. “Today I am honored to accept the endorsement of so many great leaders in our state.”

Norcross told reporters Booker and him are better suited ideologically compared to the other Democratic Senate candidates. But more to the point, Norcross said at the June 10 news conference, Democrats need to back someone who will win the seat.

“I think we need to put the best candidate forward,” he said, adding that Booker is “the candidate who’s going to win the election.” 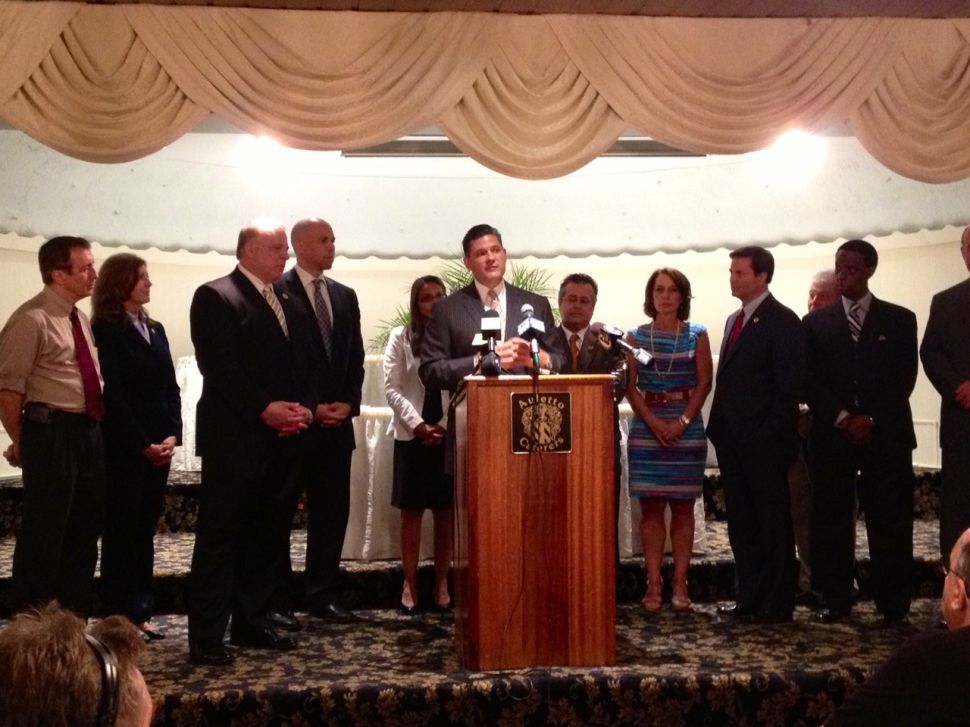