As allies of Democratic gubernatorial candidate Barbara Buono scramble to secure state committee votes for Assemblyman Jason O’Donnell (D-31), Bayonne, the districtmate of O’Donnell’s biggest champion in the State Assembly said he would do the job if asked.

A 2-1 victor in his re-election bid yesterday, state Sen. Ray Lesniak, a state party chairman in the 1990s, said he believes O’Donnell lacks the skill set the party needs right now. Instead, Lesniak said, his own skills are what the party needs.

“What I believe the party needs is a candidate with big national contributor contacts, and I have those contacts,” Lesniak said.

The senator said he could also prevent more defections from party ranks to Gov. Chris Christie. “The person has to be able to sit down with Democrats and convince them not to do that.”

If the job entails racing around the state and cheerleading, however, “I won’t do that,” he added.

At least one source described Lesniak’s public mulling and suggestion of an alternative skill set as a slap at Assemblyman Joe Cryan (D-20), his districtmate, who staunchly backs O’Donnell as state chairman and is aggressively leading the effort to secure a majority of state committee votes for O’Donnell.

“That is so ridiculous because what I’m looking at is what the party needs,” Lesniak said. “It has nothing to do with Joe Cryan. Joe is great at retail politics. There’s none better.”

The Union County power broker said he expressed his doubts about O’Donnell to Buono in person at his own campaign rally two weeks ago.

“Barbara Buono and I had a discussion at the Booker rally and I told her if that’s what you want, then that’s fine, but it not what the state needs,” Lesniak said. “People have to come together to figure out the right skill set to elect Democrats up and down the state.”

Lesniak’s county is simultaneously considering a successor to veteran Chair Charlotte DeFilippo. The senator said it appears that the contest to replace her comes down to Elizabeth Mayor Chris Bollwage versus Assemblyman Jerry Green (D-22), Plainfield.

Lesniak said he’s loyal to Bollwage, who just played a big role in helping to get the senator re-elected in his hometown of Elizabeth. 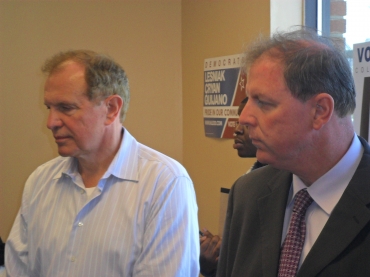