“Cory Booker will take on the Tea Party extremists in Washington who are committed to dismantling Social Security and Medicare as we know it, at the expense of our seniors and most vulnerable,” said Sweeney, who also serves as a senior official in the Ironworkers Union.

“These extremists have declared war on America by obstructing progress every step of the way —  slashing critical women’s health programs, opposing common sense criminal background checks for gun buyers, dealing with the impact of climate change and the migration of American jobs overseas . That’s why we need another fighter who will join Senator Menendez in the nation’s capital. Cory is that fighter,” he added.

“Mayor Booker understands the plight of middle class families who struggle to send their kids to college without taking second mortgage loans on their homes and carrying long-term debt,” said Greenwald. “He knows that our kids can’t compete in the global economy without a world-class education here in America. Cory Booker offers fresh ideas to make the dream of an affordable college and grad school education a reality.”

“As the Mayor of Camden City, I couldn’t be more thrilled to have as our next United States Senator someone who knows exactly the kinds of complex problems we face every single day,” said Mayor Dana L. Redd. “Cory has been a longtime friend and an ally in our efforts to rid our streets of illegal guns and gun violence. There is no one better to have as an advocate for urban revitalization in New Jersey than Mayor Booker. He helped put Newark back on the map.”

“The South Jersey Democrats and Cory Booker are perfect together: He is a winner and we play to win,” said State Senator Donald W. Norcross (D-5), Co-Chair of the Camden County Democratic Committee. “We are going to knock doors, collect vote-by-mail apps, call, email, Facebook, and tweet our friends to make sure they vote for Cory on August 13th and again on October 16th.”

“Cory Booker is a unique leader — someone who can appeal to both urban and suburban constituencies, fight for fiscal responsibility while championing the cause of social justice,” said Assemblywoman Gabriella Mosquera (D-4), one of the youngest members of the Legislature. “I am excited to be a part of Cory’s team to bring the next generation of leadership to the nation’s capital.”

In addition to Mayor Redd and Assemblywoman Mosquera, those joining Sweeney and Greenwald in endorsing Mayor Booker for U.S. Senate include: 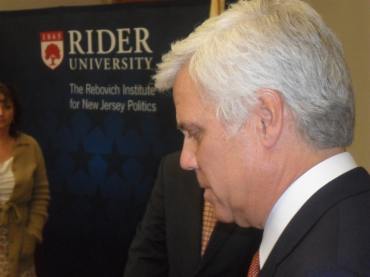