According to the Booker Campaign, Demissie has worked as a senior manager on campaigns and in political organizations at the municipal, state and federal levels for more than a decade. He served as field director for Chicago Mayor Rahm Emanuel’s 2010 campaign and as the national political director for Organizing for America. He also worked for both of the top Democratic candidates during the 2008 presidential race, serving as then-Senator Obama’s Ohio Get Out the Vote director in the general election and as deputy field director for Hillary Clinton during the Iowa caucuses and Connecticut state director in the primary.

“Addisu has helped lead campaigns that empowered voters and harnessed grassroots support in unprecedented ways,” Booker said. “His depth of experience and his understanding of what it takes to engage and motivate voters will be crucial in this special election contest.”

Demissie is a veteran of both the Democratic Senatorial Campaign and the Democratic Congressional Campaign Committees, consulting on the organizations’ top targeted races. Most recently, he co-founded his own political consulting firm, 50+1 Strategies, based in San Francisco, Calif., where he serves as a principal.

“Mayor Booker has proven he knows how to bring people together to deliver meaningful results for the people of Newark, whether it’s working to lower crime or to create jobs and new opportunities for its residents,” Demissie said. “That’s the kind of leadership Washington needs, and I’m excited to help send him there.”

Demissie is a 2001 graduate of Yale University and holds a juris doctor degree from Yale Law School. 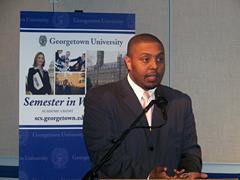