Waiting for your techie boyfriend to shed his hoodie and become a man? Don’t hold your breath.

Regardless of how many startups he’s founded or apps he’s developed, a guy doesn’t mature until age 43, according to The Telegraph, while women become adults 11 years earlier, at 32.

And according to the ladies, it feels like it takes men even longer than that. Get ready for some Britishisms:

“Alarmingly, eight out of ten women believe that men ‘never stop being childish’ – with breaking wind, burping, eating fast food in the early hours and playing videogames their biggest bug-bears.”

Eating fast food between the hours of 6 and 11 p.m. is apparently okay, though.

The Brits are also peeved at mandudes who “sometimes trying to do wheelies/stunts on their bike,” “doing crazy dance moves” and “sniggering a bit at rude words,” listing these practices among the top 30 maturity failings of men.

Add “nonstop redditing” and “paying for Miller Lites with bitcoin” to that list and you’re describing a sizable chunk of tech dudes. But it’s definitely a good idea to keep giving them millions of dollars in venture capital, if only for our own enjoyment. 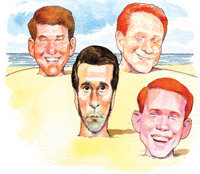