TRENTON – Garden State Equality leaders and their allies promised action a day after the United States Supreme Court struck down the Constitutionality of the Defense of Marriage Act, starting with a legal motion filed by Lambda.

“New Jersey will have marriage equality before the end of the year,” said Troy Stevenson, the organization’s leader, standing on the steps of the New Jersey Statehouse.

Buoyed by the Supreme Court’s decision, Buono said she supports marriage equality, “not just for my daughter, but for all.”

The Defense of Marriage Act defines marriage as only between a man and a woman. “Although Congress has great authority to design laws to fit its own conception of sound national policy, it cannot deny the liberty protected by the Due Process Clause of the Fifth Amendment,” said Justice Anthony Kennedy, voting with the 5-4 court majority.

Christie strongly disagreed with the decision.

“I don’t think the ruling was appropriate,” Christie said Thursday on his “Ask the Governor” radio show. “I think it was wrong.” The Republican governor decried the decision as “incredibly insulting” to President Bill Clinton, who signed the Defense of Marriage Act into law.

At the rally, Lambda Legal announced its plan to file a motion for summary judgment in New Jersey Superior Court on behalf of Garden State Equality and six same-sex couples.

“The demise of DOMA Section 3 means that New Jersey’s marriage discrimination is all that bars same-sex couples and their families from the full range of federal rights, benefits, and protections. With this new legal landscape, New Jersey’s same-sex couples and their children need swift action,” said Hayley Gorenberg, Lambda Legal Deputy Legal Director.

“In Lambda Legal’s original New Jersey marriage case, Lewis v. Harris the New Jersey Supreme Court ruled in 2006 that it is unconstitutional to give same-sex couples lesser rights than different-sex couples. In 2013, after the defeat of DOMA, there is nothing left to debate – couples in civil unions are not being treated equally under the law.”

“There is no longer any excuse to delay: the state must rectify the discrimination taking place within our borders immediately. It is as immoral as it is impractical to force any New Jersey family to be stripped of critical economic and legal protections every time they cross the Hudson or Delaware Rivers to return home from our closest neighboring states,” said Stevenson, Executive Director of Garden State Equality.

“With the Supreme Court’s rulings, it’s become more clear than ever that not only are LGBT people treated as second-class citizens in New Jersey, but that New Jersey itself risks becoming a second-class state to its neighbors, where all people will be treated equally at all levels of government.”

“We believe that the choice is clear: New Jersey should enshrine the Supreme Court’s decision into our state’s law and end discrimination against LGBT couples who wish to marry,” said Udi Ofer, Executive Director of the New Jersey Civil Liberties Union, which participated in the press conference.

“New Jerseyans shouldn’t have to cross state lines to receive the equal treatment they deserve. Our fight will not be over until New Jersey implements the principles of the Supreme Court’s decision and ensures that discrimination against LGBT couples does not have a place in our free and democratic society.”

At the rally, Buono said she supports Lambda’s motion. 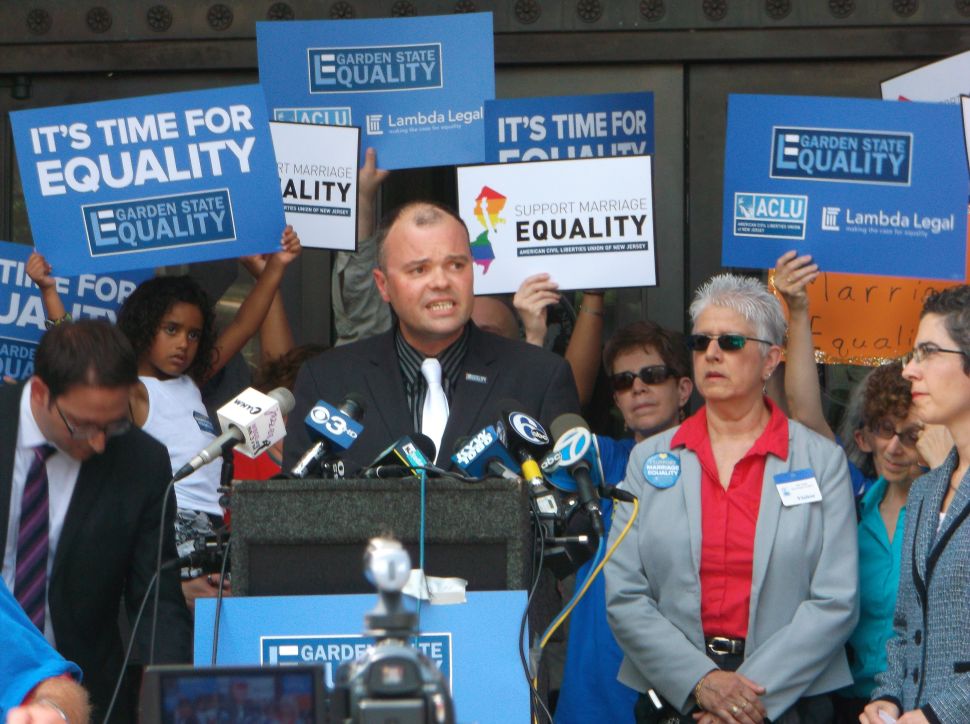