On Monday night, PBS aired an interview between Charlie Rose and President Barack Obama. Earlier that afternoon, PBS sent an email to some 50 news organizations with a transcript of the interview. The transcript was embargoed until 11 p.m., when the interview was scheduled to air on the network. It was sent as a courtesy, so that journalists could write stories about it ahead of time and be ready to publish as soon as the interview aired.

But not all recipients honored the embargo: BuzzFeed Politics published an excerpt of the transcript at 4 p.m., scooping Mr. Rose on his own interview.

NBC reporter Chuck Todd took to Twitter to condemn BuzzFeed’s breaking of the embargo. “Wow, so in the obsessive world of trying to get clicks, we have news orgs no longer respecting embargoes?” he asked. “Can we have some rules respected?”

Other journalists, notably Commentary’s John Podhoretz, defended BuzzFeed’s actions, arguing that both parties had to agree to a news embargo for it to be valid. If the writer never agreed to the embargo and PBS just sent the transcript unsolicited, he argued, then there was no embargo.

BuzzFeed editor in chief Ben Smith, meanwhile, portrayed his breaking of the embargo as a victory for readers. Respecting the embargo, he suggested, would mean depriving his readers of important information in order to please a clubby fraternity of his journalistic peers.

But it’s not as though BuzzFeed was bravely exposing secrets that the government wanted embargoed; he stole a scoop from a public television network. “Come on,” Mr. Todd tweeted in response to Mr. Smith. “It’s a crappy thing to do to PBS.” 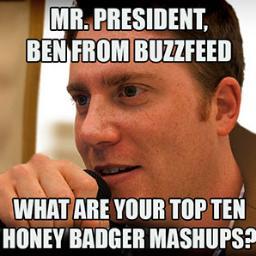