“With the passing of Senator Lautenberg, God rest his soul, there comes a unique opportunity for New Jersey to send someone to Washington to challenge the folks that have been consistently eroding our fundamental Constitutional rights over the past several years,” Donohue said. “Steve Lonegan is that someone. After speaking with Mayor Lonegan this morning, I am excited to support his campaign.  I have no doubt that there will be sharp contrasts with the opposition with Steve Lonegan as our candidate for United States Senate.

“I have had the pleasure of knowing Steve for several years now and have always admired his zeal for the founding principles of our nation,” the chairman added. “As the State Director of the New Jersey Chapter of Americans for Prosperity, he has been a vocal leader in the fight against higher taxes in New Jersey.  I can’t tell you how great it would be to have Steve Lonegan shaking up the United States Senate and working for the people instead of business as usual in Washington.  I am happy to lend my support to Mayor Lonegan in the August 13th Primary Election and look forward to working hard for his candidacy right through the Special Election in October.” 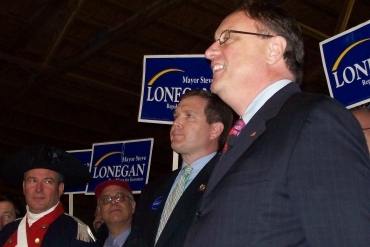