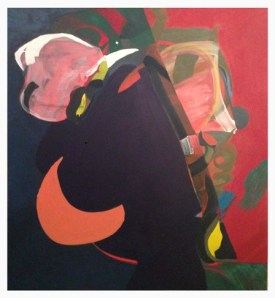 ‘Nature’ (2013) by Marley Freeman. (Courtesy the artist and KANSAS)

A large triangle, velvety blue like a midnight Virgin and underlined in reddish orange, dominates the middle of Marley Freeman’s Nature, a 4½-by-5-foot abstract acrylic. To one side is a less intense blue, to the other a dark scarlet, and around the triangle an aura of overlapping lines and swirls in yellow, pink, white and green. Despite the variation of gesture and texture—scaly patterns in one blue corner, translucent pinks overlapping with blue-gray, a syrupy, tacky-looking surface to the scarlet—the whole has a kind of paper-cut flatness. It indicates depth, to the degree that it does at all, like a puppet theater, without trying to fool the eye. And even its central composition is unusual. Most of Ms. Freeman’s paintings are more diffuse, layering stripes and swipes in plaid-like patterns, or setting minimal figures—a couple of red and green bars; two wing-like red brushstrokes—against neutral backgrounds in order to put all the painting’s elements on a par. The result, at its best, is somehow both transparent and opaque, interchangeable and resolutely singular.

Carey Denniston turns a series of large, generic-looking color photographs of common places and objects—a light fixture, a sidewalk grating, grass, the round, flesh-colored top of a buoy in Iceland—conceptually inside out by printing each photo twice, mounting each in a handmade white frame backed with archival white foam core, and then mounting the twinned photos together, partially offset but face to face. Each image is only partially revealed, as if the viewer were spying through a mail slot or looking through a camera with its aperture frozen in the act of opening or closing. The pictures aren’t the point: all of them together—they’re each titled To what degree a stone is a stranger / To what degree it is withdrawing—constitute a precisely minimal and abstract portrait of looking. (Through June 22, 2013)