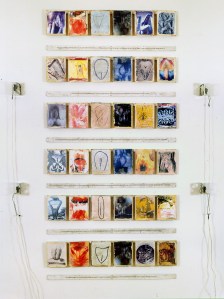 Carolee Schneemann’s Flange 6 rpm consists of seven motorized steel fixtures protruding from perpendicular walls. Atop each fixture, three cast-aluminum arms wave and rotate. (One fixture has only two.) Cast using a lost-wax process and left unpolished, these arms look like seaweed or badly burnt flippers. They suck at the air like whirlpools and waver like flames made solid. They throw shadows onto the walls, interrupting an otherwise floor-to-ceiling, slightly pixelated orange projection of actual flames shot in the foundry where the arms were cast. All of this makes for a weird kind of transparency, a revelation of process so total that the revelation itself comes to seem like the goal. But then, what is it revealing?

Ms. Schneemann’s 1995 Vulva’s Morphia, a 6-by-6 grid of color photos alternating with six lines of text, has a clearer subject. The first line of text reads, “Vulva deciphers Lacan and Baudrillard and discovers she is only a sign. A signification of the void, of absence, of what is not male …” The rough, low-res images include temple reliefs, pornographic close-ups, and diagrams both medically explicit and conceptually abstract. There’s a snapshot of the artist as an infant, bathing in a round basin, which Ms. Schneemann ripped in half when she was a little girl to erase the exposure of her genitals and then restored, as an adult, with a pink line drawing. There are also less specific formal assonances, like the Virgin in a red robe spreading her arms, a crayon self-portrait with what appears to be a triangular black beard, and the triangular, tooth-lined roof of a crocodile’s mouth. But the mechanism of this piece is equally paradoxical: simply by collecting, blurring and juxtaposing them, Ms. Schneemann simultaneously breaks down a variety of apparently fixed images, reveals the fraught and fertile, semi-verbalized confusion that underlies them and uses that confusion to build them anew. (Through June 22, 2013)