Though she’s already endorsed a member of her own party for mayor, Democratic Congresswoman Carolyn Maloney is apparently a huge fan of Republican John Catsimatidis as well. And Ms. Maloney had a special message for the Catsimatidis supporters seated in the swanky Terrace on the Park penthouse in Queens yesterday evening.

“I love John Catsimatidis!” she shouted into a microphone at the front of the ballroom, before leaving the podium to quickly schmooze with the crowd.

Ms. Maloney’s appearance at the candidate’s “friendraiser” event was seemingly impromptu. After Mr. Catsimatidis, a billionaire grocery and oil magnate, finished addressing the crowd, Frank Sinatra’s “New York, New York” began playing from the speakers. Within a minute, the music was cut so Ms. Maloney, who was holding her own fund-raiser downstairs, could speak.

As Ms. Maloney sped toward the elevator with her handlers, Politicker attempted to catch up with the veteran Upper East Side pol and official supporter of Council Speaker Christine Quinn’s mayoral candidacy. After an aide insisted that she wasn’t taking any questions, Ms. Maloney gave a few quick words in front of the crowded elevator.

“We’re old dear friends,” she said when asked about her kind words for Mr. Catsimatidis. “I introduced his daughter to his new son-in-law. We’re all family friends. I was here tonight with Christine Quinn, I’m supporting Christine Quinn for mayor, but I love him as a friend.” (Mr. Catsimatidis’s daughter is married to Christopher Cox, former President Richard Nixon’s grandson.)

Though he’s a Republican, Mr. Catsimatidis, a former Democrat, has been generous to many Democratic candidates across the city, including Ms. Maloney. She received $3,500 in campaign contributions from Mr. Catsimatidis in the late 1990’s and early 2000’s.

“You can have lots of friends, can’t you?” she asked, sliding into the elevator. 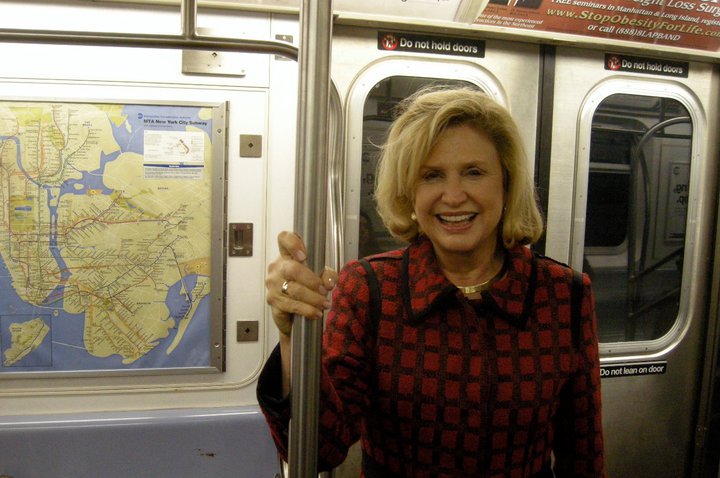