PRINCETON – Sitting at opposite sides of the lectern, the state’s two gubernatorial contenders were under one roof Wednesday evening, talking business and industry, and taking the occasional swipe when possible.

Republican Gov. Chris Christie and Democratic hopeful Sen. Barbara Buono shared a stage at the 2013 Employer Legislative Committees of New Jersey Dinner. Both gave speeches on the state of the state and their plans if elected to serve in November.

After taking the microphone, Buono responded to Christie’s campaign ads that attempt to tie her to the state’s last Democratic governor, telling the audience the choice in the upcoming election is between her and Christie – not former Gov. Jon Corzine.

“Let me start by introducing myself. I’m Barbara Buono, the Democratic nominee for governor. Now, chances are you all knew that,” she said. “But I just want to make it clear for those of you who may see the ads on TV and think Chris Christie’s running against Corzine,” she said.

She joked about the former governor, saying “no beard, no sweater vest.”

Buono ripped the governor for his “unacceptable” slogan he used when touring around the state that touted the “Jersey comeback.”

“We’ve recovered less than half the jobs we lost during the recession, less than either Pennsylvania or New York. At the same time, the jobs we recovered are lower paying than the state average,” said Buono, adding, “Numbers don’t lie, that’s not a comeback. That’s unacceptable.”

The Democratic hopeful accused her Republican counterpart of choosing “divisive politics that take care of a few at the top” but forget about the rest of New Jerseyans. Unlike Christie, Buono said if elected she would focus her attention to being a unifier, saying she would invest in the state’s small business community, as well as in education and New Jersey infrastructure.

Following her remarks, Christie joined the crowd in applauding Buono. But, he wasted little time in telling the audience that before he took office, “’No’ was not a word in Trenton’s vocabulary, unless it was to the business community,” he said, referring to bloated government and bureaucratic red tape.

“We need to look back where we’ve been to help us determine the best course going forward,” he said. “We know what the condition of the business community was in our state four years ago.”

Unlike Buono’s speech, Christie’s remarks were peppered with moments of laughter and applause from the crowd of at least 450 attendees.

Christie touched on familiar themes, boasting accomplishments on cutting red tape, slashing spending and keeping taxes in check. The governor also touched on pension and health benefit reforms made during his tenure, saying it took real leadership to hammer out a deal with the Legislature.

“See, what the people of this state are sick and tired of is the partisan politics of yesterday,” he said, explaining some Democrats in the state were willing to work on the pension and benefit reform package while others weren’t.

Christie, without calling Buono out by name, said it’s easy for some lawmakers to “dig in [their] heels” and stick with a political party instead of voting for what’s right for the state.

The incumbent asked for attendees to give him four more years behind the helm, and the crowd responded by giving Christie a standing ovation. 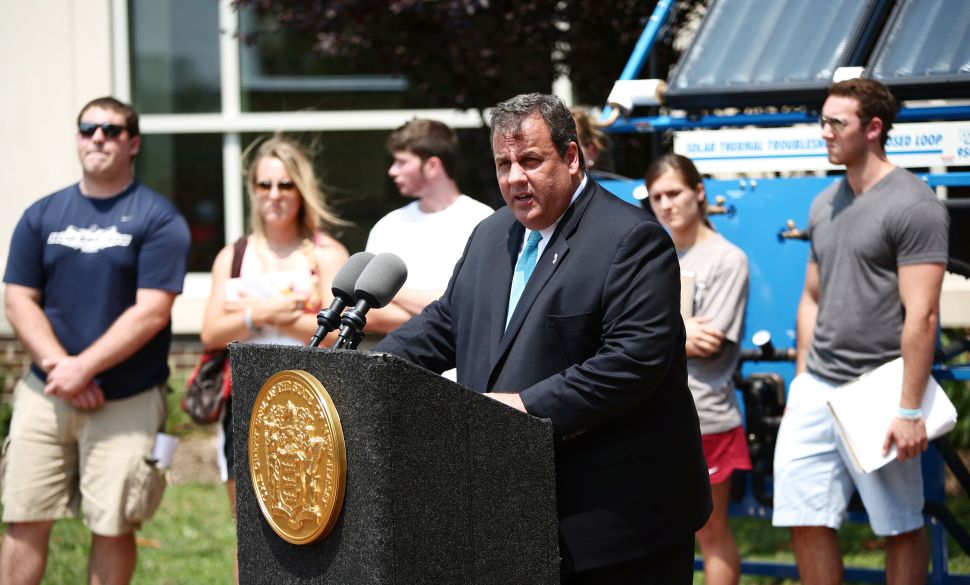