Mayoral front-runner Christine Quinn refused to criticize President Obama over reports that the federal government has engaged in widespread monitoring of Americans’ Internet activity and telephone calls–arguing that surveillance is crucial to the city’s safety.

During an interview last night with CNN’s Piers Morgan, Ms. Quinn said that it was still too early to judge what Mr. Morgan described as “the single greatest attack on civil liberties and privacy of Americans I’ve ever seen.”

Regardless of the federal activity, she said the city has a right to engage in its own surveillance to keep the city safe.

“Now, I also understand, as someone who’s an elected official in New York  and wants to be mayor, that in the world we live in, we we have to do monitoring; we have to do surveillance,” she said. “If you believe somebody is a legitimate criminal, terrorist, bad guy … then we need law enforcement to be looking at their information” in a way that protects innocent people who aren’t  implicated.

Mr. Morgan asked the mayoral candidate if she would start snooping on his own emails if elected.

It was a very different response from Public Advocate Bill de Blasio, one of Ms. Quinn’s challengers, who argued the news represented a “clear threat to civil literates,” according to an interview last night posted by NYTrue.com.

“Despite my tremendous respect for the Obama administration, we’ve seen these very troubling revelations around the Associated Press surveillance, now today more revelations around surveillance of telecommunications. I think this is something we as Americans have to be vigilant about … it’s something we have to struggle for,” he said, drawing a parallel to stop-and-frisk, where he said, “We don’t have the checks and balances in place to stop it.”

He argued that the city’s next mayor needs to be “one of the guardians of civil liberties in this country and a strong voice for them. I intend to be that,” he said. “But we have to first put our own house in order on the question of stop and frisk. 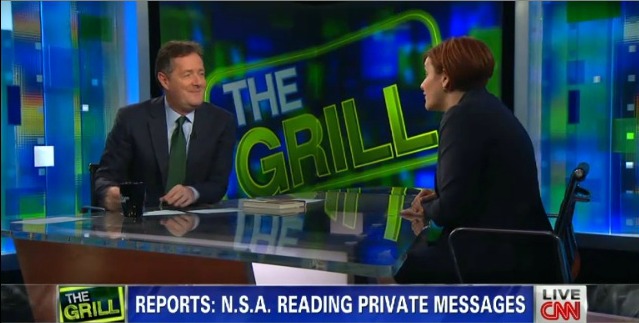