WeWork, a co-working space on Little West 12th Street, is a warren of glassed-in office cubicles populated by aggressively branded startups with names like Strike Force and Savage. Rodawg is quite like the other young design and marketing businesses there, except that the product it centers around is illegal in the state of New York.

Founder Josh Gordon wants Rodawg to be for weed what “Billabong is for the surfing industry.”

Tall and scruffy, Mr. Gordon was dressed to meet The Observer in the casual-but-expensive mode popular among entrepreneurs: designer jeans, a plaid collared shirt opened to reveal a hefty gold chain and a T-shirt screen-printed with a steer skull. One arm draped over the back of a chaise, he spoke in the laconic, “bud”-peppered tone of someone who had had a positive high school experience.

“Hopefully these will not be perceived as just the run-of-the-mill smoking products for stoners, but rather something that investment bankers, doctors, lawyers and the people getting bottle service at clubs will relate to,” he said, referring to his designs for a gold-plated joint case, a grinder shaped like a pepper mill and a cannabis prep kit modeled after an upscale cocktail set.

Rodawg, which consists of Mr. Gordon, an in-house designer based in Miami and a rotating group of interns, is positioned “for the discerning socialite rather than the stereotypical hippie,” Mr. Gordon said.

On the company’s home page, a photo of blissed-out tokers who look more at home in a VW microbus than at a Bergdorf’s trunk show is accompanied by this text: Imagine elegance and class where once was a crass, dirty field of grass. Envision a glass of fine wine or cognac, sipped slowly at a soiree amongst good friends, the liquor smoothly trickling down your throat, and you’ll understand the subtle beauty of the fruits of our labor.

Mr. Gordon, 26, was raised in Miami and wintered in Colorado, where marijuana was legalized for medical use in 2000. A formative event for his budding entrepreneurship was the opening of a dispensary near his family’s Colorado ski house. “I grew up seeing the marijuana revolution,” he said. “There were all these dispensaries popping up out of nowhere and black-market guys going mainstream. I realized there’s an opportunity here.”

A report by See Change, a cannabis-oriented research firm, estimates that the U.S. medical marijuana market was worth $1.7 billion in 2011 and could reach $8.9 billion by 2016. The sharks are circling: a former Microsoft executive last week announced plans to create a Seattle-based Starbucks-like weed purveyor, one of many new enterprises aimed at the growing market.

New York City is starting to see its share of the action, despite Gov. Andrew Cuomo’s staunch opposition to pot legalization of any kind. The town is full of investors, after all, and Connecticut and New Jersey—now among the 18 states where medical marijuana is legal—are right next door.

Teeming with designers and tastemakers, New York City was the perfect place for Mr. Gordon to launch his business after his graduation from Fordham University’s School of Business last year, which followed a stint studying Talmudic law in Israel as well as a wedding. “What better place to start a lifestyle brand?” Mr. Gordon asked.

Using his own savings and seed money from his father, a legalization supporter who worked in financial services, Mr. Gordon’s first move, in early 2012, was luxe-ing up the utilitarian packaging used by marijuana dispensaries. “They use plastic bags and cheap vials,” Mr. Gordon explained. “You go into a liquor store and buy a bottle of Johnnie Walker, it’ll come in a nice glass bottle with good branding, and you feel the value. That’s really not the case in dispensaries.”

Rodawg (the name comes from a nickname for the founder’s son) came up with the idea of private-label pre-rolled joint cases, upon which dispensaries could overlay their own branding. After racking up $50,000 in sales at trade shows, the company then turned its attention to producing its own branded joint cases with the Rodawg name and logo embossed in black. Inside lies a set of empty, unbleached paper cones sourced from Amsterdam; the pack runs $5.99 for three cones and $6.99 for five. “We realized our core competencies are design, understanding what people like and having a decent sense of fashion,” said Mr. Gordon.

To expand the business and develop a second-generation case, Rodawg found a Washington-based investor intrigued by the marijuana market, who provided an infusion of $500,000.

That investor is a member of The ArcView Group, the first angel investment group specifically devoted to marijuana businesses. Troy Dayton, who co-founded the California-based firm in 2010, began advocating for cannabis legalization after a childhood prank. During high school, his friends enticed him to smoke for the first time and then got a security guard to pretend to arrest him. The joke was a total buzzkill, and it left Mr. Dayton ready to fight for U.S. citizens’ rights to party.

Mr. Dayton heralds marijuana as no less than the “next great American industry,” as he enthused repeatedly to The Observer during a recent phone conversation. “Everybody and their brother wants to open up a dispensary or a cultivation, particularly in the Northeast,” he said. “It’s like a feeding frenzy.”

In mid-June, one of those meetings will take place at an undisclosed location in downtown Manhattan with over 50 of the country’s foremost marijuana investors, ranging from retired Wall Street warriors to young tech millionaires and the early pioneers of the cannabis market.

The price of admission to ArcView’s club is $3,500 in annual fees or $10,000 for lifetime membership and a willingness to invest at least $50,000 in the future of the marijuana business, which could turn out to be a very profitable endeavor. “There are entire areas of ancillary businesses that haven’t been touched,” Mr. Dayton gushed. “There’s fresh snow in this industry.”

Mr. Gordon is just one of a group of marijuana entrepreneurs who are as comfortable referring to “core competencies” and “pivoting” as they are to “nugs,” the slang by which Mr. Gordon often refers to the plant. Jason Levin is the founder of UpToke, a Palo Alto-based vaporizer company whose slogan is “Silicon Valley meets Humboldt County,” nodding to the California district known for its potent cannabis cultivation.

Mr. Levin noticed that e-cigarettes were gaining traction in the tobacco market, but the devices weren’t effective for consuming marijuana’s active ingredient, THC. So the University of Florida-schooled engineer designed a sleek, $300 vaporizer shaped like a large pen, with features like an attached grinder, quick heating time and a much longer battery life than competitors. “It’s like any startup: pick a problem you want to solve that you’ll enjoy working on and work on solving the problem,” Mr. Levin explained.  “We have engineers who used to work for Apple and NASA,” Mr. Levin told The Observer. “We think of ourselves as a tech startup that happens to make vaporizers.”

After an initial phone call with Mr. Dayton, Mr. Levin brought the investor a functioning prototype. He passed the device around at a party in Colorado, and everyone dug its capabilities. “I hit it and I was really impressed. Everyone wanted to try this new thing,” Mr. Dayton recalled.

ArcView took on UpToke, and the company finalized its first infusion of funding at a recent meeting of the investment group in Seattle. “ArcView has been tremendously supportive of the whole process. The coaching, the exposure—they’re building up an industry that’s cohesive and professional,” Mr. Levin said.

As with any nascent industry, cannabusiness has its challenges, and Mr. Dayton and other experts will be addressing legal, funding and insurance issues at a June 11 symposium hosted in Soho by Medical Marijuana Business Daily. “This is a serious business seminar for investors, executives and entrepreneurs. It is not for patients or consumers,” reads an invitation online.

So maybe leave the three-foot bong at home. “It  betters the industry if you have a business that premises itself on providing a more classy-type offering,” said Mr. Gordon, ensconced in his WeWork cubicle. “It has to look good to the general public, as opposed to the stereotypes we’ve become accustomed to.” 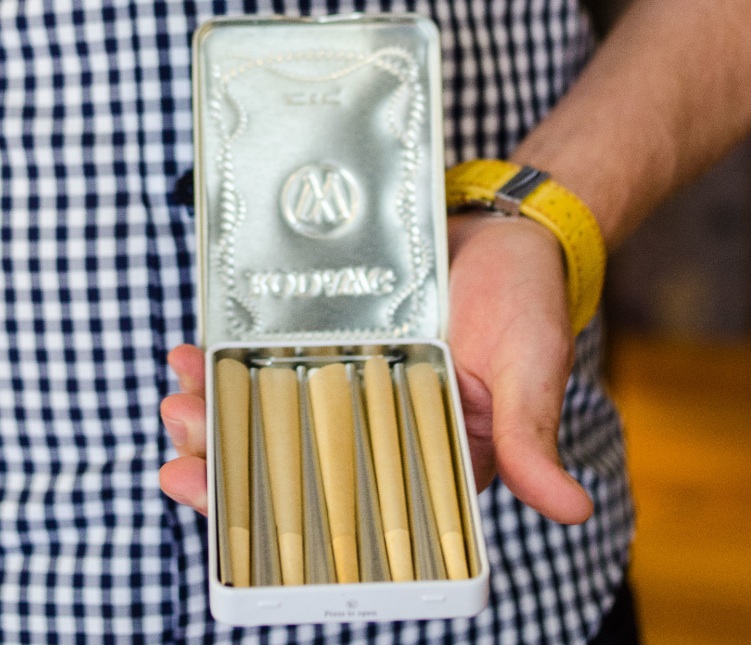