Currie, a compromise candidate, was backed by both Democratic gubernatorial candidate Barbara Buono and Senate President Steve Sweeney who have been feuding for a month over the choice.  Lizette Delgado was named vice chairwoman of the state party.

“Today’s vote is great news for all New Jersey Democrats and the future of our party,” Buono said. “Chairman Currie and Lizette Delgado are two outstanding elected officials who will serve our party with distinction. They will be tremendous leaders in the fight for working and middle class families. A strong and unified Democratic Party will lead us to victory this November.”

Currie’s ascension to the post averted a civil war within the party as Buono’s initial choice, Assemblyman Jason O’Donnell, was unacceptable to several party leaders owing to his particpation in an attempt to overthrow Assembly Speaker Sheila Oliver.

Currie, who has been with Buono from the start of the campaign, initially said he was not interested in the job, but tonight accepted it graciously.

“It’s a great honor to be named Chairman of the State Democratic Committee,” Currie said. “Now is the time for Democrats to come together in support of Senator Buono, our legislative ticket, and all of our candidates down ballot. Together, as one united Democratic Party, we will defeat a Governor who has protected the wealthy at the expense of working and middle class New Jerseyans. With more than 400,000 people unemployed and property taxes up nearly 20 percent, we cannot afford another four years of Chris Christie.” 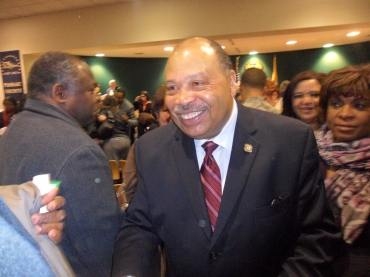