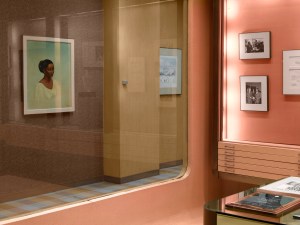 In 2010, the Johnson Publishing Company, the publisher of Ebony and Jet, sold its 11-story modernist headquarters in Chicago. When the office opened in 1972, it was the first major building to be designed in downtown Chicago by a black architect in 200 years, and in this elegant, understated exhibition, Windy City–based artist David Hartt takes us inside the building after the sale, before the company moved out, in seven photos and a 12-minute video accompanied by the music of a jazz sextet. (Scored by Nicole Mitchell, that graceful soundtrack is alone worth a visit to the show, which was curated by Michael Darling at Chicago’s Museum of Contemporary Art and is presented here by assistant curator Thomas J. Lax.) 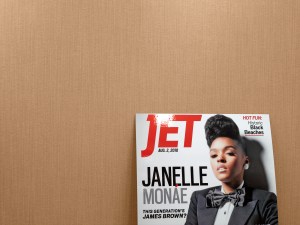 ‘Lounge,’ 2011. (Courtesy the artist, Corbett vs. Dempsey and the Studio Museum)

Mr. Hartt’s camera homes in on luscious yellow cubicle paneling, the awards room (in one photo there JFK and John H. Johnson, then the CEO of JPC, hold an Ebony) and employees in a meeting as they discuss two images that we’re unable to see. The once-bustling interiors, dressed in shades of orange and brown—they’re largely unchanged since the company moved in—are tranquil, even a little disquietingly vacant. (JPC sold the building because it needed less space.) The juxtaposition of those dated, though stately, interiors and the gleaming new computers and printers that occupy them underscore the company’s endurance, and hint at the ghosts and gravitas that fill the building’s halls.

The artist’s light touch leaves the project’s meaning bewitchingly ambiguous. There are hints of sadness and ambition and (this being an office) boredom. One might take it as a quiet tribute to the legacy of one indelible enterprise, but also to the labor involved in any cultural or aesthetic project that aims to create real-world change.