WEST ORANGE – It finally happened today under the vaulted arches of McLoone’s Boathouse beside a languid summer lake.

It surprised few insiders, this “historical moment,” in the words of Pastor Joe Carter of the New Hope Baptist Church who said “hopefully today the country is watching. People can come together and move past” party.

The much observed political love fest set the jaws of Democrats grinding with annoyance ever since the aftermath of Election Day 2009, when party members started pointing fingers at one another and a gravely wounded Gov. Jon Corzine left Essex County Executive Joe DiVincenzo calling after him in vain as Corzine retreated into the depths of loss.

It continued when PolitickerNJ.com posted a photo of Gov. Chris Christie and Essex County Executive Joe DiVincenzo holding hands, in an innocent moment of prayer in East Newark.

It kept going when Christie christened a sea lion cage at the Turtle Back Zoo as Democratic gubernatorial candidate Barbara Buono hovered at the edges of the event in search of a ticket.

Today, it culminated with DiVincenzo, joined by clergy members from the African American community and five Essex County Democratic mayors, formally declaring his cross-the-aisle support for the incumbent Republican, the second endorsement in as many days by a major Democrat.

“I supported Jon Corzine for governor,” admitted the executive in a tableaux of 28 other men in dark suits, and Christie.

The day after the election, Christie appeared in Newark at ground zero of DiVincenzo’s political origins: Newark’s North Ward.

“You know that famous embrace of Obama? That’s how he embraced me,” the executive said. “But when he embraced me I thought he was going to give me a kiss and say, ‘I’m not going to do anything for you.’”

It didn’t turn out as he expected, he said.

DiVincenzo said Christie’s Superstorm Sandy embrace of Obama and his insistence on New Jersey getting its fair federal share was the moment for him.

“That’s when I made up my mind that Chris Christie needed to get re-elected.” In this county we have a slogan: ‘Putting Essex County First. ‘”

If binding arbitration with the PBAs wasn’t changed or modified, the taxpayers would have been broken, he said.

“He did that with the two percent cap,” DiVincenzo said, with the governor standing at his side.

Christie’s a friend, he acknowledged, but he supports Christie because of the job he has done and the strong leadership he has exhibited, he said.

At his turn in front of the microphone, Christie called it “a pretty amazing day.”

He spoke of the difficulties he faced as a Republican seeking to lead a blue state.

“I have reached out from the first day to have friends on both sides of the aisle,” the governor said. He wanted to do more than simply have dialogue. He wanted to “get things done.”

None of the Democrats onstage today changed his party affiliation. “It’s because we have worked together and proven to each other putting people ahead of party is the right way to go, the necessary way to go,” said Christie, who’s known the executive for 12 years.

“Joe, I thank you very much for your leadership and your support,” he added.

Christie and DiVincenzo both staunchly back charter school education, and today the governor said he would continue to champion education reform and vowed to call out on those pastors in those churches and others in public life standing in the way.

“I won’t stand for it no matter what pressure is put on me,” said Christie, denouncing the entrenched interests of the education establishment.

He reiterated his support for the voucher pilot program, the Opportunity Scholarship Act.

“Every day we don’t give them another opportunity, their parents watch the dreams they have for their children become less and less realistic,” the governor said.

He wants choice in schools, he said repeatedly.

State Sen. Brian P. Stack (D-32), Union City, announced his support for the Republican governor yesterday, satisfied to take the lead in a longstanding battle with DiVincenzo over who could attach the most superlatives to the name of the GOP governor, who is crushing his Democratic opponent by 30 points, according to this week’s polls.

But DiVincenzo’s endorsement was arguably the biggest Democratic Party power boost to Christie. In charge of $1 billion in county patronage, the powerful county leader – acolyte of Newark North Ward Democratic leader Steve Adubato, Sr., who today sat proudly in the front row – has broad reach and an excellent political record of backing winners.

“I am the highest ranking Portuguese in America,” said Ironbound-brand Fontoura to laughs. He proceeded to heap praise on Christie. “I have been working with him since he was U.S. Attorney,” said the sheriff, hitting the public safety power chords in his gubernatorial endorsement.

Reporters later gathered around DiVincenzo and someone asked him what he thought of Christie’s decision to have a special October election for the vacant U.S. Senate seat rather than include the contest in November on the same day the governor faces the voters.

“It’s what he wants to do,” he said of the governor’s decision. “Democracy at its best.”

Someone else asked the executive what he thought about the field of four running for U.S. Senate, his longtime ally Speaker Sheila Oliver (D-34) among them.

“Cory Booker’s going to win,” he said, one eye on his 2014 re-election when he trusts the line, with then Sen. Booker and U.S. Rep. Donald Payne (D-10) also on it, will help him secure another four years in the heavily Democratic county.

Regarding Buono, DiVincenzo said, “A nice lady and a good senator,” but today he left no doubt about his love for the incumbent Republican governor. 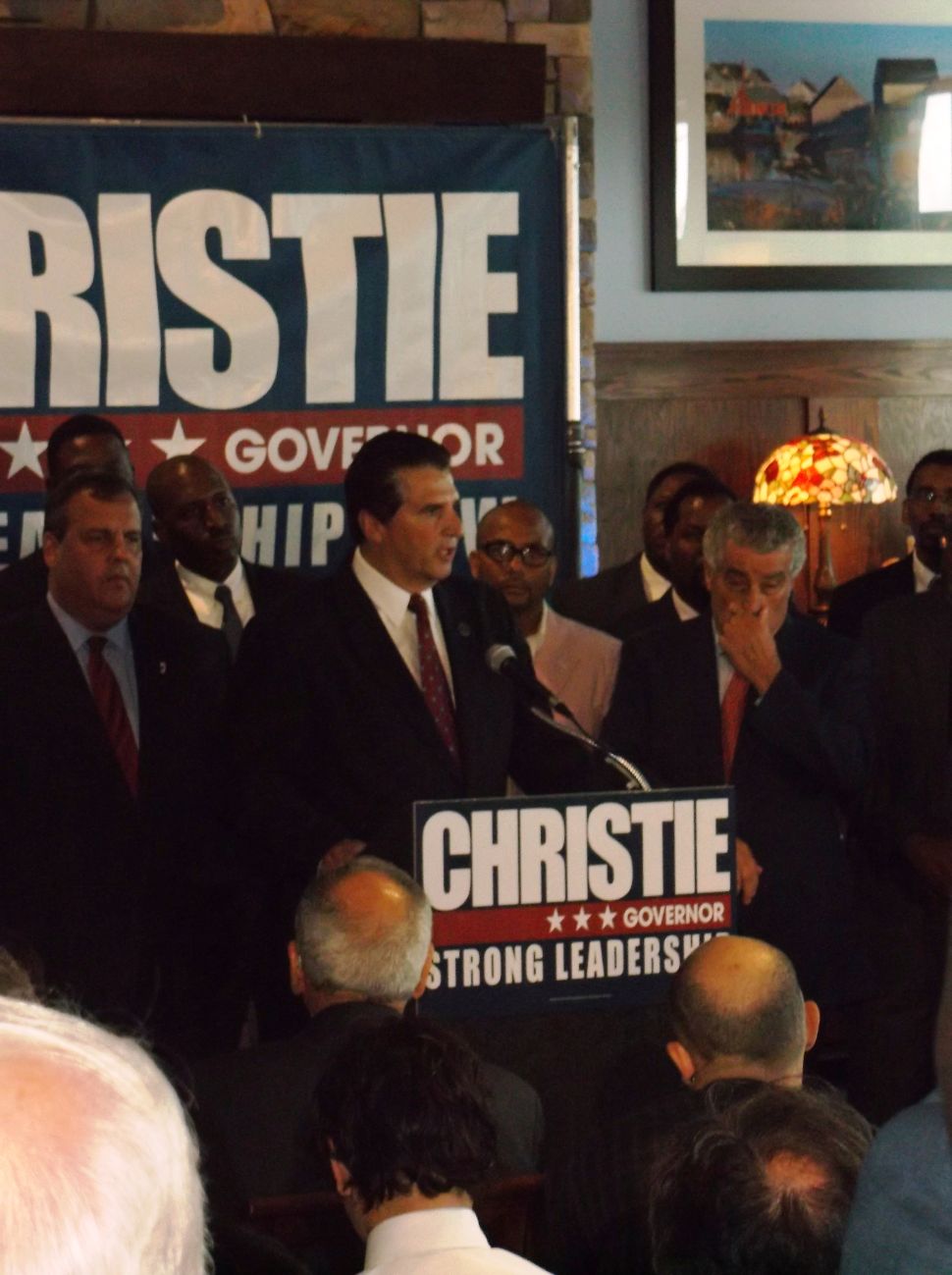