More than  three dozen high ranking Democrats including leaders from both houses of the legislature and several county chairmen tonight threw their support behind state Sen. Ray Lesniak for state party chairman.

The letter puts Lesniak on a collision course with Assemblyman Jason O’Donnell, who was tapped last month by Democratic gubernatorial candidate Barbara Buono as her choice for state chairman.

“Both within our state and nationally, Ray Lesniak is respected not only for his experience and intellect, but for his political ability,” said Oliver, who had shown signs she might be willing to put the past aside after having lunch with O’Donnell during the Democratic conference in Atlantic City last month. “As the eyes of the nation again fall upon New Jersey, we cannot pass up the chance to have such a well-regarded leader at the helm of our party.”

Weinberg said that when the governor announced Monday that the special election for the U.S. Senate seat left vacant with the death of Sen. Frank Lautenberg would be held in October it changed things for Democrats.

“On Monday, the tenor and scope of this entire election cycle changed, and every Democrat must recognize that simple fact,” said Weinberg. “We look forward to sitting down with Sen. Buono and mapping out a course of victory for all Democrats, at all levels.”

Sweeney, the most vocal member of the opposition, said Lesniak is the man to unify the party in this important election year.

“I have seen first-hand Ray’s ability to bring everyone in the room together for the common good,” said Sweeney. “That energetic ability to bridge divides is what Democrats need most. This year is too important for our party and our state. We need Ray’s experience and his willingness to take our case directly to the people to unify us and lead us to victory.”

A spokesman for the Buono campaign declined to comment on the support for Lesniak.

Reached by phone Thursday, he said he’s not seeking the job, but he has the experience to do it well.

Earlier this year, several county chairmen from the northern portion of the state issued a release backing Buono’s right to choose her own chair.  She’s counting on that support should the choice come to a state committee vote.

The release is the latest salvo in the battle for control of the state party and inches the situation closer to all out civil war.

Democratic gubernatorial candidate Barbara Buono last month named Hudson County Assemblyman Jason O’Donnell as her choice for chairman of the state party.  The move set off an internal war within the party, with Sweeney leading the opposition.

Buono believes as the party’s standard bearer she should be entitled to her own nominee, however, Sweeney and others say by naming O’Donnell, who late last year was part of an attempt to overthrow Oliver, Buono is needlessly dividing the party.

Buono has stood fast, while her opponents have marshaled their forces culminating with the Thursday night release.

The state committee is set to vote on the chairman next week and each side believes they have enough votes to install their own candidate.

The war between the party nominee and its senior leaders is unprecedented this late in the game and has preoccupied the Buono camp, which is already fighting an uphill battle.  Sources opposed to O’Donnell and supporting Lesniak said they hope O’Donnell will step aside before next week’s vote in order to end the feud. 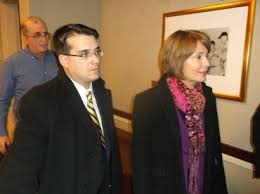