Ed Koch’s tombstone, the result of years of meticulous planning by Koch himself, has been engraved with the wrong birth year.

The beloved former mayor’s tombstone now reflects a birthdate that would have made him a child during his years of service in World War II—December 12, 1942, instead of 1924. “I made a mistake,” Flynn Funeral Home director Tommy Flynn told The Post. “He’s a great guy. I’ll correct it.”

“Correct the record!” George Arzt said in his best imitation of his longtime friend. “We’re correcting the record, Ed.”

Mayor Koch, 88, who died in February of congestive heart failure, famously directed each detail of his burial, with discussions beginning in the 1980s.

His choice of burial site at Trinity Church in Washington Heights was particularly poignant, given his family’s longtime residence in Newark.

“I don’t want to leave Manhattan, even when I’m gone. This is my home,” he said after purchasing his burial plot in 2008. “The thought of having to go to New Jersey was so distressing to me.”

But the former mayor, notorious for securing the last word on all things, borrowed from another in inscribing his tombstone’s closing text. The words of Wall Street Journal reporter Daniel Pearl, who was kidnapped and killed by al Qaeda terrorists in 2002, read as follows: “My father is Jewish; my mother is Jewish; I am Jewish.”

Mr. Flynn has pledged to fix the gravestone before July 4th.

Update: The birthdate has been changed to its correct year as of early today, according to the Daily News, well before Mr. Flynn’s July 4th pledge. Rest in peace, Mr. Koch! 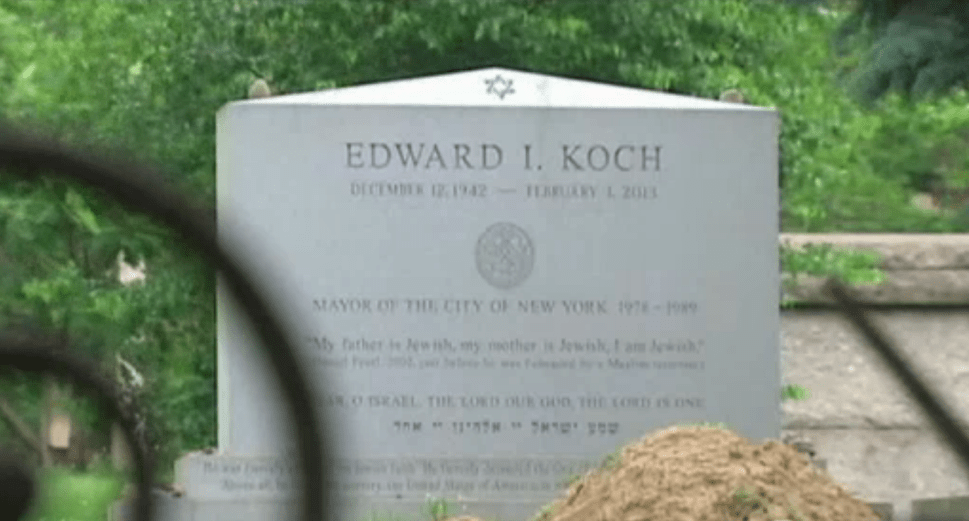