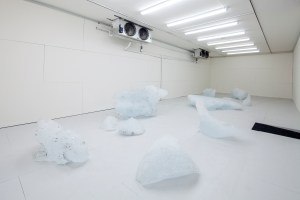 This wide-ranging exhibition has no statement of purpose, only a theme: “Dark Optimism.” Nominally curated by Klaus Biesenbach and Hans Ulrich Obrist, its real verve comes from the talented and hardworking younger people they have invited to curate some of its 12 “modules.”

The artist Josh Kline does a terrific job assembling half a floor of the museum into a smart section entitled “ProBio,” which muses on the possible future relationship between machines and humans. A dozen iRobot Roombas scramble to clean the museum floors. There’s Dina Chang’s silicone diamonds set with human hair and Ian Cheng’s Entropy Wrangler (2013), a sculpture in which dildos and iPhones glow weakly in a shallow tank of sandy water like marine creatures washed ashore. Mr. Kline’s section poses thoughtful questions about the role of technology as a bodily prosthetic. Its aesthetic is the young, downtown, technology-oriented one associated with the gallery 47 Canal. Mr. Kline is represented by the gallery and has included other artists from its stable.

Elsewhere are a couple of single-room standouts, like Klara Lidén’s installation of reappropriated German, American and Swedish trash cans. But some of the show’s modules did not appear to be attracting much attention; on the day I visited, the interactive video game program in the basement “Cinema” module had just two attendees, one of them the museum’s projectionist. 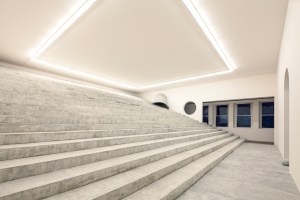 A de Chirico-like set on the museum’s top floor, made by Adrián Villar Rojas, is devoted to Expo 1’s series of talks and seminars, organized by the online magazine Triple Canopy. On the day I attended, 15 serious-looking participants, mostly women, were hunched around a table in a hot room discussing Occupy Wall Street. In an adjacent room, a guard invited me to work for a while, or pluck a volume from a library of free-to-borrow, edgy-looking books. The lack of air conditioning only added to the impression that everyone involved was very committed. The talks program, a module called “School,” makes intellectual and cultural figures available to anyone willing to pay the museum admission fee. Luminaries include Duke Professor N. Katherine Hayles, author Rivka Galchen and performance artist Marina Abramović.

The most popular module of Expo 1 since the show opened in May has been the “Rain Room” at the Museum of Modern Art. Visitors wait in long lines to enter the space, created by the London design collective rAndom International. A digital stage with water falling from the ceiling, it smells like chlorine and looks like the set of a Bob Fosse musical. People seem to love the experience of being inside it, perhaps because there is a godlike feeling to walking around in the rain and not getting wet. (Digital sensors keep the rain spigots from turning on if you are directly beneath them.) This isn’t exactly new territory—PS1, home of the “Warm-up,” has long been a proponent of immersive, interactive art displays. Water in all its forms dominates Expo 1; in other modules, museum founder Alanna Heiss displays Meg Webster’s Pool (1998), an indoor waterfall complete with carp, and PS1 mainstay Olafur Eliasson shows Your Waste of Time (2006), several blocks of ice from an Icelandic glacier. In theory, the Rain Room, in the words of an accompanying brochure, encourages visitors to “explore what role science, technology, and human ingenuity can play in stabilizing our environment.” In practice, it encourages high-quality, starkly backlit selfies. 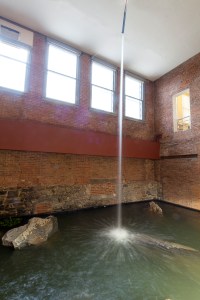 Expo 1 also has an offsite element, a “Dome” set up by Volkswagen in the Rockaways that will stay there through June 30. The 25 artist-submitted, juried projects for the future of the Rockaways, compiled on the museum’s website, are fascinating.

Like a 19th-century Universal Exposition, Expo 1 leans heavily on the spectacular, the new and the technological in imagining the future. It doesn’t make a lot of effort to explain itself, leaving much of that work to the visitor. The art on view doesn’t encourage contemplation as much as participation, and it would seem that much of the curating has been outsourced to a bunch of eager beavers keen on promoting their own projects and initiatives. As such, perhaps the model of the VW Dome is what PS1 sees as the initiative of the future: an unprogrammed, branded space in which hit-or-miss, outsourced curatorial projects rule the day. (Through Sept. 2, 2013) —Maika Pollack 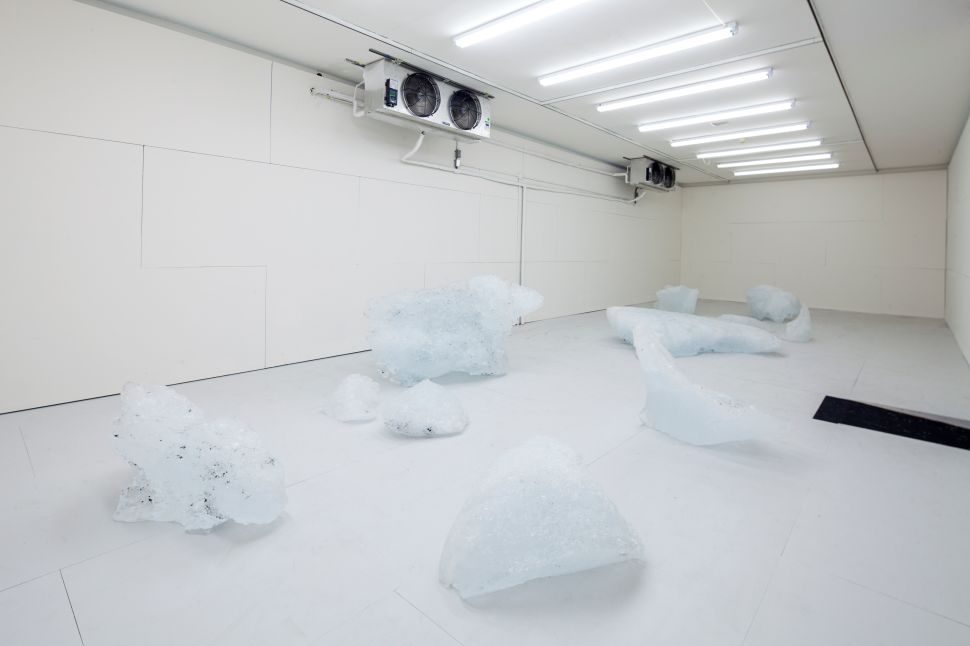