Of the four candidates running in the special primary election on Aug. 13, Cory Booker has the highest name recognition (78%), compared with U.S. Representatives Frank Pallone (49%) and Rush Holt (42%), and Assembly Speaker Sheila Oliver (20%). The same is true for a candidate’s favorability rating: Booker is appealing to 52 percent of registered voters, a number which puts him significantly ahead of his competitors. Fourteen percent say they feel favorably toward Pallone, 12 percent say the same for Holt, and Oliver garners a five percent favorability rating.

“The primary election poses a unique set of challenges. It’s occurring during a time when most people aren’t paying attention to politics, the window of time to campaign is compressed, and the state is in the midst of a gubernatorial election at the same time,” said Krista Jenkins, director of PublicMind and professor of political science at Fairleigh Dickinson University. “He (or she) who enters the race with the best name recognition and favorability rating has a big advantage over other candidates, even though the field is comprised of longtime public servants including U.S. House Representatives and the current State Assembly Speaker.”

Turning to the upcoming gubernatorial election, Governor Christie maintains a solid lead over his Democratic opponent, State Senator Barbara Buono. A significant thirty percentage-point gap separates him from Buono, with Christie attracting the support of 57 percent of registered voters. Twenty-seven percent say they would vote for Buono were the election to be held today. This gap remains virtually unchanged from when the same question was asked in March, before the primary election which legitimately named Buono as the chosen Democratic candidate. Back then, 58 percent said they favored Christie, with 28 percent supportive of Buono.

Christie continues to draw a good amount of support from Democrats, a group he will need to pay close attention to in blue New Jersey. A third (33%) of Democrats prefer Christie over Buono (50%). The last time this question was asked (March 2013), Christie attracted the support of 36 percent of Democrats with another two-fifths (40%) favoring Buono. It is also important to note that those who identify with neither party, the independents, are breaking more than two-to-one for Christie (53%) over Buono (18%).

A gender gap continues to divide women and men in their gubernatorial preference. Although the majority of both sexes say they plan to support the governor, women are more mixed in their preferences as compared to men. Among women, half (50%) support Christie while another third (34%) support Buono; the governor commands a greater lead with male voters (65 versus 21%, respectively).

“Senator Buono fought hard for the right to challenge the governor who continues his transcendent partisan appeal,” said Jenkins. “These numbers merely underscore the challenges that await her as the campaign enters the all important general election period.”

Buono’s name recognition has increased as well, something that would be expected given the primary election results and increased focus on the gubernatorial election. In January, the last time this question was asked regarding Buono, 28 percent had heard of her, whereas today that number has increased to 73 percent. However, her favorable-to-unfavorable ratio is about even, with a quarter who remain unsure about their feelings toward her. Twenty-one percent say they feel favorably toward her, with another 24 percent who express an unfavorable opinion toward the senator.

The same survey also checked in with voters about Christie’s job performance and their feelings regarding the direction of the state. His job performance numbers are down slightly from where they were in March, although he remains in the 60s and continues to appeal to Democrats and Republicans alike. Today, 61 percent say they approve of his job performance, with another quarter (26%) who disapprove and ten percent who say they are unsure how to judge the governor. Two-thirds (66%) rated him favorably in March and one-fifth (20%) gave him a disapproving job rating. Solid majorities of groups who are not usually considered suspects for saying positive things about a Republican governor continue to offer their approval. For example, 44 percent of Democrats, 56 percent of women, and 52 percent of those who reside in public employee households approve of the governor’s job performance.

However, opinion is mixed over his decision to hold two special elections to replace the recently deceased U.S. Sen. Frank Lautenberg. About a third say they agree (35%), disagree (34%), and are unsure (34%) about the governor’s decision.

“Even in the face of a controversial decision to hold a special election for the U.S. Senate closely before the gubernatorial election in November, Governor Christie continues to be received warmly by New Jersey voters,” said Jenkins. “Should his appeal continue through the campaign season, he stands poised to potentially help his party in the Legislature in November.”

A majority of voters also continue to express a positive attitude toward the direction of the state. More than half (57%) believe the state is headed in the right direction, whereas another 28 percent of voters fear it is now on the wrong track. Democrats (46%), women (51%), non-whites (49%), and those from public employee households (50%) are the groups least likely to give a rosy appraisal of the state’s trajectory.

President Obama and the Nation

Finally, and in contrast to what Garden State voters have to say about leadership and the health of New Jersey, Democratic President Barack Obama receives a 51 percent approval rating for his job performance and two-fifths of voters (41%) say the country is headed in the right direction. A plurality are concerned about the direction the country is headed (47%).

“Although New Jersey continues to be affected by economic trends at the national level, and is comprised of more Democrats than Republicans, the president is evaluated less positively by Garden Staters and the state is believed to be in a healthier state as compared to the nation as a whole,” said Jenkins. “Clearly there is more to a voter’s appraisal of leaders and overall conditions than their partisan predispositions.”

The Fairleigh Dickinson University poll of 705 registered voters in New Jersey was conducted by telephone with both landline and cell phones from June 10 through June 16, 2013, and has a margin of error of +/-3.7 percentage points. 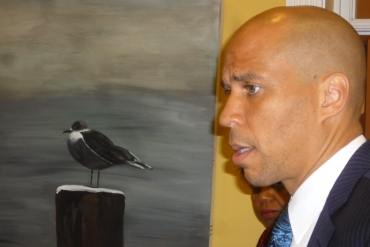