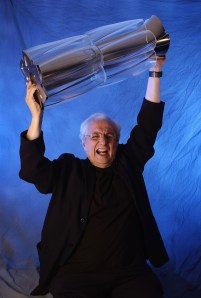 Gehry holding the World Cup of Hockey trophy, which he designed, in 2004. (Getty Images)

Architect Frank Gehry, who is responsible for the elegant design of the excellent Ken Price retrospective uptown at the Met, gave an interview to Foreign Policy magazine. It’s really worth reading all the way through, but a few highlights follow below. (Thanks to Blouin Artinfo for sharing the article.)

It turns out that Cai Guo-Qiang is a fan of Mr. Gehry’s work, and that he’s designed a “little museum” for the fireworks artist’s hometown, Quanzhou. Here’s Mr. Gehry: “He paid for the initial design, actually. The Communist Party secretary wrote me a letter to say that she loves it. But whether we’ll get to build it, I don’t know. It’s hard to work in China.”

He also notes that the team for Guggenheim Abu Dhabi, which Mr. Gehry designed (it will be his first building in the region), worked with Human Rights Watch to certify that conditions for workers on site are appropriate. Mr. Gehry: “There was a time when they were being beat up on for the conditions of temporary workers. And they did something about it: They built relatively comfortable camps. These issues are important to me when I take a project.”

Read it all here, and head to the Price show, which runs through Sept. 22.