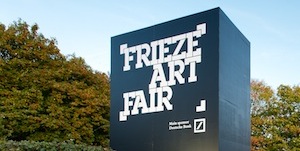 Frieze New York feels like it could have ended yesterday or 10 years ago. I wouldn’t know. I no longer have any concept of time. (It came and went a little over a month ago. —Ed.) Anyway, Frieze London, which is coming up in October—sooner than you think—announced its Projects programming today.

The participants are: Andreas Angelidakis, Gerry Bibby, Rivane Neuenschwander, Ken Okiishi, Angelo Plessas, Lili Reynaud-Dewar and Josef Strau. In addition, the recipient of the Emdash Award, which helps artists under the age of 35 create a work at Frieze, is Pilvi Takala.