Norcross called Lesniak a “statesman” and said the party would be lucky to have the senator at the helm.

“Ray and I have worked together since the mid 1980s and probably are among the few that are still actively engaged in the Democratic party politics,” Norcross said. “I think we would be extremely fortunate for a man of his stature – a recognized statesman and fundraiser and a real quality Democrat to lead our party and I hope to encourage others to support his candidacy.”

Last month, Democratic gubernatorial candidate Barbara Buono tapped Hudson County Assemblyman Jason O’Donnell for the post, despite calls from some in her party – most notably Senate President Steve Sweeney – to go in a different direction.

Buono has stood firm on O’Donnell, saying she likes his energy and enthusiasm.  Behind the scenes some sources claim the push by some Dmeocrats to oust O’Donnell has to do with control of the coffers and nothing to do with O’Donnell.

Though Buono has said she has no plans to drop O’Donnell, the incoming state chairman could face a challenge at next week’s party convention.

Reached Thursday, a spokesman for Buono said they had hoped Lesniak would join their campaign, but he declined.

“We heard Senator Lesniak when he said he had significant national fundraising contacts and was ready to be engaged, so we asked him to chair our Finance Committee and take on a more active role in our efforts to help Democrats up and down the ballot in November,” said spokesman David Turner.

“Unfortunately, he said he couldn’t do that unless he had total control of the State Party.  As the Democratic nominee for Governor, Senator Buono simply cannot agree to that condition.  Senator Lesniak did a great job as State Democratic Party Chairman in the early 90’s, but we believe that this year’s election provides the New Jersey Democratic Party with the opportunity to grow and expand our reach while also allowing some of the next generation of Democratic leaders to emerge.  Jason O’Donnell is prepared to fight for Democratic values across 21 counties over the next five months, and we stand behind him as the choice to be the next Chair of the New Jersey State Democratic Party.” 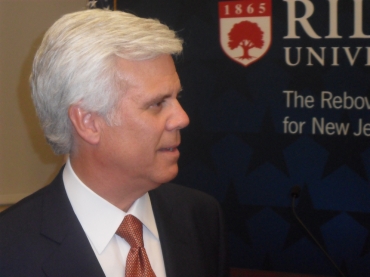