“Over the past two years Roselle has been successfully moving forward from the failed leadership of Garrett Smith,” said Holley in a statement. “The last thing our community needs is Smith, or a company with which he is associated, working for or representing the Roselle Board of Education, particularly in the matter of insurance.”

On Wednesday morning, the board booted Hub Insurance and approved a $7.5 million contract for Alamo Insurance, for whom Smith works.

“The Board’s current insurance provider is doing an excellent job,” Holley said of Hub. “This hasty, unnecessary move by the Roselle Board of Education led by Board President Donna Obe and Board Member Anthony Esposito reeks of a vicious political endeavor to usurp the progressive partnership between the Borough Government and the Board of Education. Smith is currently under indictment, facing charges of insurance fraud that could possibly result in a ten-year prison sentence. Hiring him, or an insurance firm with which he is associated, is a slap in the face to every resident of our Borough! Roselle needs to keep moving forward, not go back to the old heinous days of Garrett Smith.”

Holley wants the Board of Ed to take up the gavel against Smith.

“I am calling on the Board of Education to immediately schedule a special meeting and revoke this contract,” the mayor said. “Our children’s education should be the Board members’ primary concern – not awarding contracts to political allies who have already been rejected by Roselle voters.” 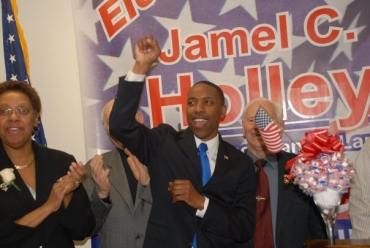