Family and friends of the late last veteran of WW II to serve in the U.S. Senate gathered at Park Avenue Synagogue on Manhattan’s Upper East Side to say goodbye to the 89-year-old senator who died Monday morning.

They remembered the Senator as a mensch, a proud American public servant, proud Jew from Paterson, New Jersey and the “consummate man in the arena.”

“He was tenacious in the best sense of the word,” said Menendez. “It came from his deep and abiding belief in always holding on and always fighting on. Frank Lautenberg was a man for his time, one of the greatest-generation. … He was a man from New Jersey, a kid from Paterson.

Former U.S. Senator Clinton recalled sitting with her fellow senator in the back of the chamber and remembered him saying it wasn’t where you sat, it’s where you stand.

He spoke of a friend and fellow Democrat, one of his closest friends in the Senate.

“This is a lot easier,” The vice president joked of delivering Lautenberg’s eulogy compared to that of the late Republican Senator Strom Thurmond.

“He always thought practically: What can I do to make it better? It was real simple to Frank. There was a problem, so we should fix it,” Biden said. “I believe the Greek philosopher Heracletes was correct when he said ‘Character is destiny.’ Frank had exceptional character.”

Biden recalled with warmth the senator approaching him to ask him if he should run for re-election in 2014, and Biden said he told Mr. Lautenberg, “I think you’ll win.”

“I think even Christie will vote for you,” the Vice President said, finding Christie in the crowd and pointing him out with a smile. “We have one thing in common, we both love the University of Delaware, we both went there.”

Then, as he grew more frail leading up to his announcement that he would not pursue re-election, Senator Lautenberg called Biden and said, “I don’t think I can run. My legs.”

“He desperately wanted to run again,” Biden said. “Not because he wanted to be senator, but because your dad never quit. He never gave up.”

Broadway star Brian Stokes Mitchell sang “The Impossible Dream” from “The Man of La Mancha” and “My Way.” 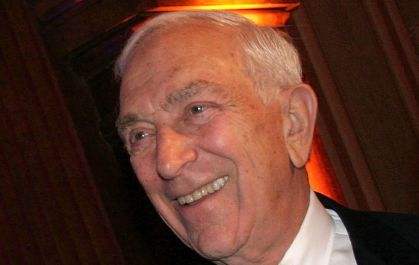