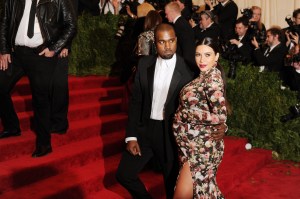 West and Kim Kardashian at the 2013 Costume Institute Gala at the Met. (Getty Images)

Next Tuesday, Kanye West, arguably the greatest artist of the present era, will release his sixth album, Yeezus. As Mr. West was finishing work on it, New York Times music writer Jon Caramanica visited him in Malibu, Calif., at Shangri-La Studio, which Bob Dylan and the Band had built in 1970 and is now owned by producer Rick Rubin. They had a pretty great conversation.

Mr. West, as is well known, is a contemporary art aficionado, and has had Takashi Murakami and George Condo design album covers for him. It turns out that Le Corbusier, who’s the subject of a MoMA show that opens on Saturday, was a pretty big influence on the new album. From the interview:

Caramanica: One of the things I thought when I heard the new record was, “This is the anti-College Dropout.” It feels like you’re shedding skin. Back then, you were like: “I want more sounds. I want more complicated raps. I want all the things.” At what point did that change?

West: Architecture — you know, this one Corbusier lamp was like, my greatest inspiration. I lived in Paris in this loft space and recorded in my living room, and it just had the worst acoustics possible, but also the songs had to be super simple, because if you turned up some complicated sound and a track with too much bass, it’s not going to work in that space. This is earlier this year. I would go to museums and just like, the Louvre would have a furniture exhibit, and I visited it like, five times, even privately. And I would go see actual Corbusier homes in real life and just talk about, you know, why did they design it? They did like, the biggest glass panes that had ever been done. Like I say, I’m a minimalist in a rapper’s body. It’s cool to bring all those vibes and then eventually come back to Rick [Rubin], because I would always think about Def Jam.

Later, Mr. West tells Mr. Caramanica, “I understand culture. I am the nucleus.”

You should really read the whole piece. It’s pretty much guaranteed to make your day.