This is one bad romance.

Joanne Trattoria, an italian restaurant owned by Lady Gaga’s father, Joe Germanotta, has been downgraded from an A to a B by New York City’s health department.

Not one to let a thing like sanitation get in his way, Mr. Germanotta turned to Twitter to air his annoyance.

“Great story of NYC making progress, money and corruption. We had a bad potato in a bin with 40 good potatoes,” Mr. Germanotta complained.

He went on to list every violation in painstaking detail and even called out the health inspector for being “corrupt” — and shared her name and phone number with his 51,000 twitter followers.

A source from the Health Department told The Observer that “any restaurant operator who feels his inspection result was unfair has the opportunity to contest it in front of an independent judge at the OATH Tribunal.”

@MikeBloomberg Your DOH, Beth Torin, is corrupt. Hear my story? Joe Germanotta, we've met several times. One if your assts can find me.

Great story of NYC making progress, money and corruption. We had a bad potato in a bin with 40 good potatoes.

Here's my violations at 10:40 pm after the kitchen has been closed for 40 minutes. Potato Peeler 5 points — We were cleaning

Ice Scoop not in a storage holder, it was in the dish machine – 5 points

1) Raw, cooked or prepared food is adulterated, contaminated, cross-contaminated, or not discarded in accordance with HACCP plan.
2) Food contact surface not properly washed, rinsed and sanitized after each use and following any activity when contamination may have occurred.
3) Sanitized equipment or utensil, including in-use food dispensing utensil, improperly used or stored

The health department’s inspection isn’t the only bad publicity that Joanne has received in its first year of operation. Steve Cuozzo of the New York Post wrote a scathing review of the restaurant after visiting on its opening night.

“Grilled calamari with bitter greens and radicchio were the worst I’ve had in a lifetime of squid-mongering, the salad unseasoned and the calamari like leather.”

While Joanne might be struggling, I’m sure the Gaga clan would argue that they’re right on the Edge of Glory. 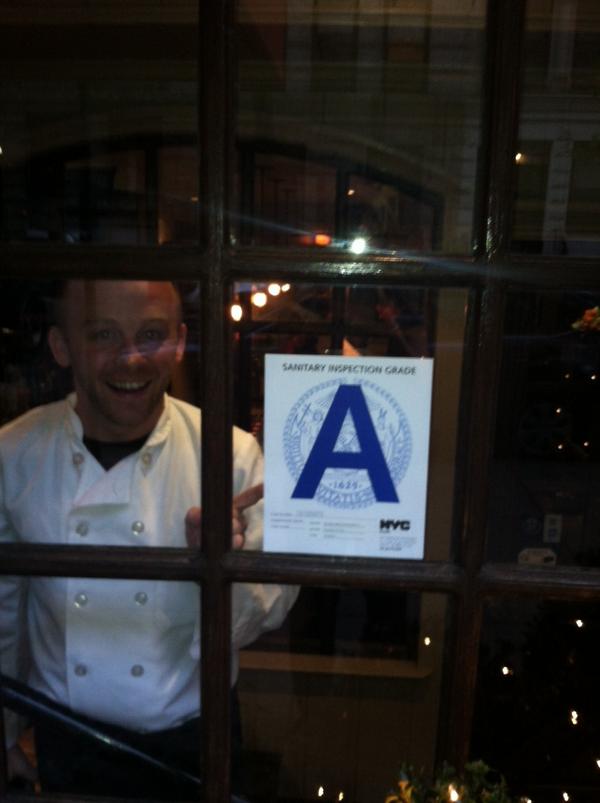