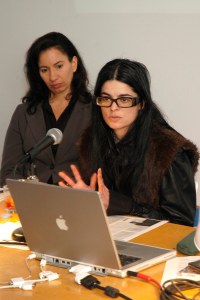 Document Journal has posted online Linda Yablonsky’s interview with Participant Inc‘s founder, Lia Gangitano, which was published in the magazine’s second issue, a few months back. (Hunt one down, when you have a moment: there’s also a great interview with Marie Karlberg and a nice fashion spread by Bjarne Melgaard, among other things.) Anyway, their conversation is worth a read. Here’s a bit from the section where Ms. Yablonsky asks Ms. Gangitano why she decided to start Participant 10 years ago, after Thread Waxing Space, where she had been working, closed:

LINDA: Why did you want to create Participant at a time when the alternative space movement was at its lowest point? That was a bold move on your part.

LIA: I think it was pure stubbornness. Some of the shutting down at Thread Waxing meant talking to artists and doing a lot of soul-searching. It told me that the alternative space model was still relevant to artists, and that artists in New York weren’t getting all they needed from commercial galleries or institutions. Even when I was at the ICA, I would spend a lot of time in the archive of the museum, reading manifestos that devalued the whole notion of collecting museums. The founders were against it, and thought that museums should not exhibit the accumulated wealth of individuals. So I guess I didn’t know any better. And my closest relationships with dealers were with Pat Hearn and Colin de Land.

She also says, “When things are really frightening, I always tell myself that money problems are the best problems to have, because when you get some money it goes away. It would be worse if I felt that the work we’re doing were irrelevant.”

Give the whole thing a read here.