Steve Lonegan wants the Democrats to beat each other to a pulp, so from a political standpoint he hesitated to get an elbow into the scrum initiated by representatives Rush Holt and Frank Pallone on front-running U.S. Senate candidate Newark Mayor Cory Booker.

But he couldn’t resist.

Holt and Pallone have a problem with Booker’s advocacy for school vouchers.

Running in the U.S. Senate special election as a Republican, the movement conservative Lonegan champions vouchers, and decries Booker’s record on the issue.

“He’s failed to get vouchers into Newark,” Lonegan said of Booker. “He has not been aggressive on this.”

PolitickerNJ.com asked Lonegan what’s been happening with his campaign.

“I haven’t been on Oprah Winfrey,” he cracked, a reference to Booker’s couch-ins with the queen of daytime TV.

Observers see Lonegan as the clear front-running Republican in a U.S. Senate Primary that also features the candidacy of neophyte Dr. Alieta Eck, who practices medicine in Piscataway and wants to repeal Obamacare.

Lonegan said he hasn’t yet spoken to Gov. Chris Christie, whose decision to have a special election in October the former mayor of Bogota applauds.

“I haven’t had the chance to give the governor a call yet,” Lonegan said. “What we’re doing right now is organizing and raising money.”

He said he did call Eck but did not receive a return phone call and speculated that some of her supporters include past Loneganites who fell away from his political circle.

“She seems to have brought together a campaign of all the people who hate Steve Lonegan, which is not a pure motive to running a campaign,” said the Republican, who did applaud her policy position on healthcare. 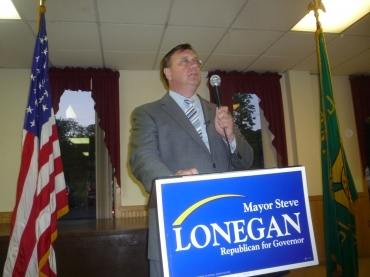