Steve Lonegan is running for senator.

Following his meeting with Doherty, Lonegan said he plans to do it.

“Not only am I running,” Lonegan told PolitickerNJ.com, “but I’m going to win. We’re going to regalvanize the Republican base.”

The leading conservative senator in the state Legislature, Doherty told PolitickerNJ.com that he doesn’t agree with the governor’s chosen timeline for a special election and calls it exclusionary.

“It’s very difficult to get the petitions done by Monday,” the senator said. “I disagree with his decision to have an election in October. This should be held on Nov. 4th. We want maximum participation.

“I laud the governor for having a primary,” Doherty added.

But he described the August Primary and October General as an exclusionary process. “I believe he has been ill advised,” Doherty said of Gov. Christie’s decision.

Doherty said he met with Lonegan and decided that Lonegan has the organization to run right now.

“I intend to support him to make sure he is the senator to represent New Jersey,” Doherty said.

A source told PolitickerNJ.com that Lonegan reached out to county party leaders, including at least one chair, who confirmed that the former mayor of Bogota told him/her that he intends to pursue a U.S. Senate run.

Lonegan ran for governor in 2009. He lost in a Republican Primary to Gov. Chris Christie. 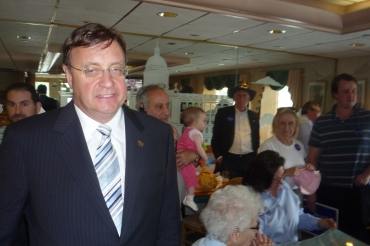