As the time grinds down until Monday’s 4 p.m. deadline, GOP insiders are wondering if Steve Lonegan, former mayor of Bogota, will indeed be the Republican Party’s candidate for U.S. Senate.

Establishment players who have fought Lonegan in the past appear to have two options at this point: embrace it or sit this one out.

Others sat in the shadows; some in utter disbelief, others in quiet rage.

The former head of the New Jersey chapter of Americans for Prosperity who mounted unsuccessful campaigns from the right of his party for governor in 2005 and 2009, Lonegan is confident about meeting Monday’s deadline to submit 1,000 signatures toward a U.S. Senate candidacy.

“We’re sitting here relaxing,” he cracked Thursday on the phone to PolitickerNJ.com, as the sounds of a whirlwind campaign operation engulfed his every utterance.

He applauded Gov. Chris Christie for selecting August and October dates for a special primary and general election respectively for the U.S. Senate seat vacated earlier this week by the death of U.S. Sen. Frank Lautenberg.

Others, establishment Republicans among them, were hardly euphoric, fuming on the other end of the phone late Thursday as they tried to check the disappointment they felt for Christie, a governor they say they admire.

The point of view runs something like this: the U.S. Senate seat is important, and Christie gave away a U.S. Senate seat to President Barack Obama in exchange for keeping his own governorship, by ensuring that the federal senate race stays off the Nov. 5th Ballot. NJ Republicans bled for Christie in 2009 with the understanding that the governor would build the party. Party politics requires leaders to take territory, not merely protect what they have for themselves.

Another insider was less caustic.

“If you listen to the press conference, Chris Christie said ‘Steve has agreed with most of stuff I’ve done,’” the Republican source said. “Chris Christie is not responsible for what he says and Republicans will support whoever comes out of the primary.”

To the point that Christie, intent on making Superstorm Sandy response the issue of the cycle, could get handcuffed to Lonegan’s conservative agenda and dragged into a donnybrook, the source said, “I think Chris Christie dominates the news.”

He conceded, however, that Republicans running for election this year trying to gain traction as Christie allies could find their messages muddied, depending on how much money Lonegan throws into his own effort.

But Patrick Murray, political scientist and pollster with Monmouth University, said he doubts Lonegan’s contest is likely to have any impact on Christie.

“Steve Lonegan will focus on immigration and federal spending,” Murray said. “I don’t think he will steal thunder from Chris Christie unless he goes after Christie, but at his announcement he made it clear he would be steering clear of criticism of the governor because the governor gave him this wonderful opportunity.

“National Republicans can hold this against the governor but he is giving conservatives their best shot,” Murray added. “At this point, this is all about 2016 (GOP Presidential Primary), and he can say, ‘You had the shot.’ He was never going to lose the governorship.” 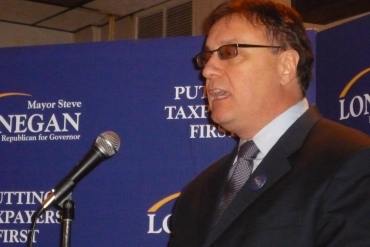