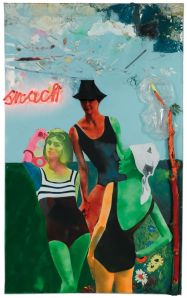 Considering the staggering number of galleries in this city, and the recent trend for revisiting under-appreciated modern masters, it boggles the mind how many aging postwar greats still await proper exposure in New York. The latest to receive well-deserved attention is French artist Martial Raysse, who is typically grouped with the 1960s European avant-garde movement known as Nouveau Realism. Mr. Raysse’s first show in more than 40 years in New York, where he lived for part of the 1960s, is a piquant look at his early work, which handily shrugs off any single label.

Within that early work, he is most famous for paintings he made with enlarged photographs, high-pitched colors and some unusual materials—wallpaper, a yellow plastic bird and a plastic bag, in the case of a 1964 work that shows orange- and green-skinned women in bathing suits. Its title is spelled out in neon red cursive: Snack (1964).

Mr. Raysse’s sexy portraits of women and scenes of leisure in the 1960s approached popular culture and consumerism from the same type of obtuse angle as Andy Warhol. Are they mocking capitalism’s middlebrow values, or reveling in them? Probably a little of both. When he really lets it rip, expertly joining garish colors in complex compositions, Mr. Raysse offers up grotesque rococo fantasies that push beyond bad taste into pure pleasure. (Paging Jeff Koons.) 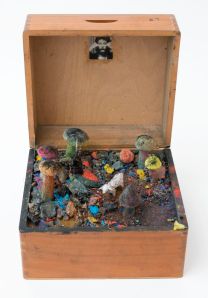 Though Mr. Raysse’s films—five are on view here—feel like typical early experiments in the medium (playing with filters, strobe lights and editing, or sending up the bourgeoisie), some other works harbor surprises. A 1965 piece has a cut canvas of two men pointing and staring at a brief Super 8 film of counterculture types romping about. Sexy stuff. And Mr. Raysse’s narrow bric-a-brac sculptures—totems (one leaning out of a corner is held to the wall with just a thin string) and object-filled vitrines—are forerunners of work by today’s younger artists, like Andy Coolquitt, Jim Lambie and Amy Yao.

Things get weird in the 1970s, as in his “Coco Mato” series, little wooden boxes filled with sand, miniature sculptures of mushrooms and the odd bird head or Buddha figurine. Imagine Joseph Cornell at a hippie commune in the Southwest. Having lived in the midst of a radical moment and made what is by any measure major art, Mr. Raysse was floating off on his own—a story for a future show. (Through July 13, 2013)