NEWARK – Following his U.S. Senate campaign kickoff in Newark, Mayor Cory Booker headed to Willingboro for the second leg of his official launch.

Good morning, everyone. Thank you so much for being here, and thank you, Bill, for that kind introduction.

Senator, I am humbled by your support. Yours is an example of public service that I have looked to for years. You have been one of my life’s most significant mentors. From when I first met with you in your Senate office in 1992 until now, you have been a constant source of inspiration, example and wisdom in my life. More than you know, I am thankful for you being here today.

I also want to acknowledge at the outset the service of Senator Lautenberg. As senator and citizen, he has been one of the most impactful New Jerseyans. He was truly a giant in this state and our nation.  From his service in WWII to his assiduous work and advocacy in the United States Senate, we are all blessed by his contributions, and generations yet unborn will continue to benefit from his leadership.

I am here today to officially announce my candidacy in the special election to be New Jersey’s next United States Senator.

I’ve often said that Democracy is not a spectator sport. That now, as much as in any time, we must bring people together, we must get into the arena, take on the difficult challenges, work in uncommon ways with conviction and courage to make our country, state and communities live up to our hopes, dreams and aspirations – not justify our cynicism, doubt and despair.

This has been what I have done with others in Newark. We didn’t spout ideology from the bleachers, or cheer for our team or jeer at others from the stands with partisan passion.

Now, if you’re in the arena like me, it’s gonna get messy, and the critics, hey, they’re going to talk about things: too much Twitter; too much exposure. After seven years as mayor, I’ve heard it all. But there’s one thing that everyone has to admit: I don’t run from big challenges. I run towards them.

Over the past 15 years here in Newark, with people in this city, we’ve partnered with every sector of our community and with people from across the state and nation.

We took on the tough problems, engaged in the difficult and complicated work, and together we have made real progress, we have raised the quality of life; we have changed a city – despite the cynicism of so many who believed that real change was impossible.

Well there is another city that needs some change.

Too many people have come to believe that Washington is a place where nothing can get done. Where people don’t work together, don’t find compromise and common ground, don’t make progress, and as I’ve heard from people all over our state – that Washington is not a place that is sticking up for American families, taking on the difficult problems or improving the quality of life in our communities.

This has to end.

We in New Jersey see our economy getting better but are not seeing enough good-jobs that can support our families. New Jersey residents are hearing endless talk from their government, but not enough real help in making ends meet, in expanding opportunity for their kids and in ensuring security for their retirement.

And so I hear it, all the time, with increasing certainty and frustration. People say that Washington is a lost cause. That DC is broken and that the two sides are too far apart.

I understand the skepticism. It’s hard to read the paper every day and not be skeptical.

We have challenges, even with the progress we have made. I see it here in Newark and across the state – too few good jobs, too much gun violence, too many students coming up short.

But despite the challenges, there is something that we know in our gut: that we as a people are so much bigger than our challenges.

But we in New Jersey know a thing about toughness, resiliency and strength – I know this… and I’ve seen this over and over at every point of my career as an elected official.

I now know, beyond a shadow of a doubt, especially here in New Jersey, that there is nothing we can’t do together. It is not a question of can; it is a question of collective will.

Think about it. We have a shortage of good-paying jobs, and yet we refuse to invest in the infrastructure that will put construction workers back to work and strengthen American competitiveness.

We have millions of people looking to help build this country by working hard and paying taxes. Many of them are here at our finest New Jersey universities. They are trained and ready to contribute, and yet the path to comprehensive immigration reform remains uncertain, denying our state the economic growth many of these residents could bring.

And some of those same kids are graduating, like students from all walks of life, with staggering debt. Yet we’re not investing in quality, affordable higher education in a way that matches the commitment these students are making.

And we have kids murdered in the streets and in their schools, and yet we can’t pass common sense gun safety laws, like requiring background checks on every gun sale in America.

So I’m here because I believe that people who care can find solutions to even the most difficult challenges.

I’m here, because when we work together, I know from experience that there’s no problem we can’t solve.

I’m here today because I know who we are and what we are capable of doing together for New Jersey and for our nation.

It is this unwavering, unshakable belief that has led to Newark’s resurgence.

When I took office, people said we couldn’t get crime rates down. But today, the streets are safer, and for the first time in 60 years, the city’s population is growing with people moving back in to be a part of the change, as more families can see a better future for themselves here.

The first downtown hotels in 40 years are being built and the first new office towers in decades. The budget is structurally balanced. The deficit slashed, and city workers are delivering more services by working smarter with fewer resources. From acres and acres of new parks to a doubling of the production of affordable housing – from new business and new jobs to court reform and new services for our veterans, Newark is charging back.

I didn’t do it alone. If I can claim any credit, it is that I was successful bringing together people who believed that better things were possible – community leaders, philanthropists, residents and entrepreneurs who didn’t just bet on themselves but who also bet on the city of Newark and its people.

They bet on us together.

That’s why Don Katz is here. With a little work on our part, he was able to see in Newark the place he wanted his company, Audible.com, to call home, even when others couldn’t. That’s created jobs and opportunity for the people of the city. Success built on success. Panasonic and Manschewitz followed Audible – as well as Pitney Bowes and Bartlett’s Dairy and so many other businesses small and large. There is forward momentum in Newark that will be impossible to stop.

The truth is, it will be hard for any single United States Senator to make the kind of difference we need. But New Jersey is used to doing what is hard – doing it not alone but by working together.

The great leaders I admire are not the ones that get people to follow them in reverence and awe, but the ones who roll up their sleeves and through service and struggle help us all realize that we all are the leaders who must now more than ever join in leading the fight and leading the way forward.

This is what we need now …

… more and more people with courage in their convictions and with wills that are indomitable to do the difficult work of bringing us together to fight our common cause, fight for common sense and achieve the common good.

This is our experience in Newark, and this is the unique experience I will bring to Washington – experience forged from working together with other New Jersey residents – not to talk about problems but to run towards them, take them on and get things done.

This is the fight I will carry to Washington – our fight, our spirit, our guts and our grit. It is time to have more courage in DC to take on the big problems, to take risks for the sake of our children and our families, to have the needed valor to reach out across whatever lines that divide, join with others, and brick by brick, as we have done in Brick City, to build a stronger foundation for our future – for New Jersey, for our nation.

I will fight on your behalf; I will be relentless in my pursuit of common ground; unyielding in my effort to bring people together. And I will choose pragmatism over partisanship.

But choosing pragmatism does not- and never will- mean abandoning principles.

Together, in fact, I think a new era is coming where we will fight to rekindle the fundamental American understanding that principled people can hold to their beliefs and still find the common ground necessary to advance the most diverse, unique and exceptional nation on the globe.  This is the American Spirit after all. A spirit that runs deep and abundant, North to South and all over the great state of New Jersey. 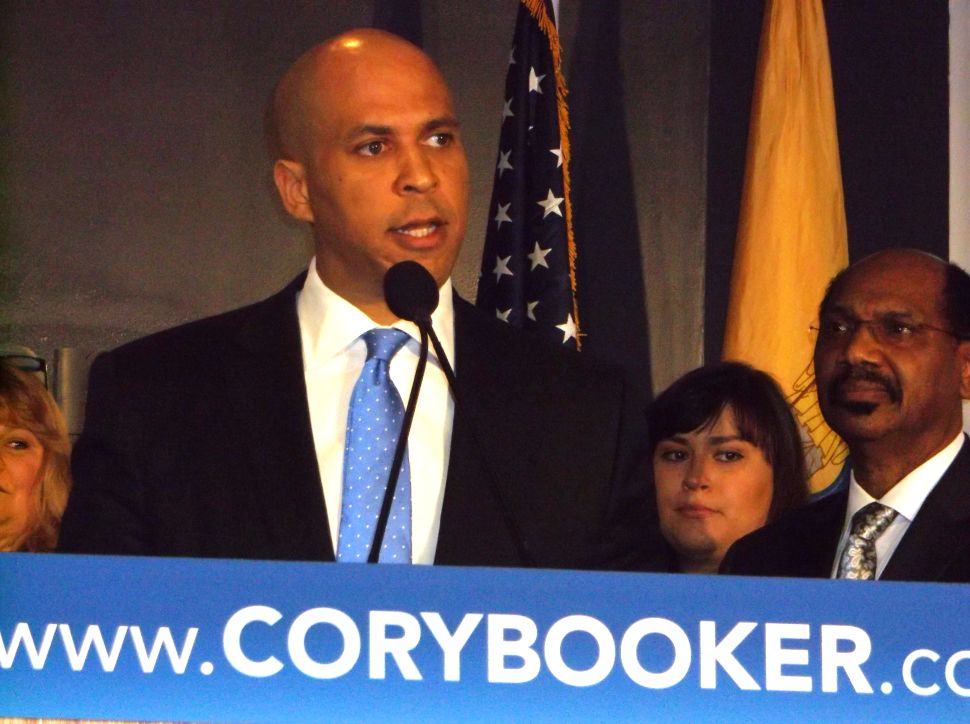