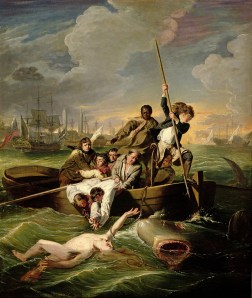 John Singleton Copley’s ‘Watson and the Shark,’ 1782, which is in the museum’s collection. (Courtesy DIA)

Even if the Michigan State Senate passes a bill that aims to shield the Detroit Institute of Arts’ collection from being sold off in the event of a bankruptcy hearing, the state’s House of Representatives is unlikely to take up the issue until the fall. The House’s spokesperson tells the Detroit Free Press that the body has no plans to vote on the issue until after its two-month recess, which begins later this month.

The state’s governor, Rick Snyder, has not said whether he would sign the bill if it arrived on his desk. “My goal is not to see the art of the DIA disappear,” Governor Snyder told the paper. “But it’s also important to recognize that as fiduciary of the city, that the art is an asset of the city. We want to try and do the best we can to maintain it in a proper way.”

Despite the faltering of the legislation, it’s not at all clear, under existing law, that creditors could actually force the city to part with its art to make good on debts. DIA’s counsel, John Pirich, tells The Detroit News, that he believes the museum’s art is protected under an 1885 statute pertaining to the limits of chapter 9 bankruptcy, and under Supreme Court holdings that state that “the bankruptcy court cannot interfere with any of the municipal debtor’s property or powers.”

Nevertheless, Mr. Pirich is still supporting the legislation. Without it, he told The News, “it may well be in dispute [whether] the emergency manager has the authority [to sell off the collection].”