EDISON – The thing about Middlesex is that it’s not Essex, where earlier today the Democratic Party’s most powerful personage embraced the re-election of Republican Gov. Chris Christie.

After all, Christie defeated Jon Corzine here in the 2009 gubernatorial election and that was before the Woodbridge mayor welcomed Christie for a tour of his town the day after the Republican won the governorship, and before Middlesex County Democratic Organization Chairman Joe Spicuzzo had to resign his chairmanship to answer corruption charges, the media exposed a troubling web of PACS backed by the county organization, Monroe Mayor Richard Pucci gritted through a comptroller’s report that he’s pulling in too much cash for his directorship of the Middlesex County Improvement Authority, Edison Mayor Toni Ricigliano lost the line in her re-election bid and rebranded herself as an independent, and East Brunswick Mayor Dave Stahl changed parties to run for the 18th District state Senate seat.

Trying to grin through the mummy wraps of a time and headline-ravaged party organization, which at least could make the case that its most visible party player is running against Christie, not endorsing him, the committee tonight at the Pines Manor turned to Kevin McCabe of Woodbridge to serve as the organization’s new chairman.

“While he has the young veneer he’s actually a seasoned old veteran,” declared Assemblyman John Wisniewski (D-19), who has two days left on the clock as state party chairman as Democrats continue their own statewide Stag at Sharkey’s to determine Wisniewski’s replacement.

Assemblyman Jason O’Donnell (D-31) versus state Sen. Ray Lesniak (D-20), incidentally, will be resolved on Thursday, “with the loser no doubt pledging lifelong fealty to the winner,” one insider here cracked with an exhausted grin.

A former Woodbridge Municipal Democratic Chairman who came out of the Jim McGreevey experience and had the backing of state Sen. Joe Vitale (D-19) and powerful Mayor John McCormac two years ago and hung around to take the scepter tonight by acclimation from departing Chairman Peter Barnes, McCabe radiated willingness.

“It’s always about relationships,” said the chairman, who spied Pucci in the crowd.

“You’ll let me know whether it’s right or wrong,” he told the veteran mayor, who in 2011 backed Barnes over McCabe.

Pucci put the young incoming chairman’s name in circulation tonight, giving a nod to the “outrageous and fantastic” situation in Middlesex of having Wisniewski as chairman and state Sen. Barbara Buono (D-18) as the party nominee for governor. And Wisniewski, who backed Barnes two years ago, was the first to lurch out of his front row chair to lead the standing ovation for McCabe when he became chairman.

Trixie Moscowitz of Metuchen received the support of the organization to replace Leslie Rodriguez-Dominguez as vice chair.

“I am a senior,” Moscowitz cried from the podium.

The remark received a huge hand, maybe the second biggest of the night behind a warm send-off for the veteran and ex-FBI man Barnes, “the right man at the right time” after Spicuzzo’s meltown, in the words of more than one committee member, and an embrace of McCabe.

“I will be honest, straightforward and candid about my thoughts and ideas,” the new chairman promised.

Buono, who backed McCabe along with McCormac and Vitale two years ago, helped unveil the older, 2013 version as “a new brand.”

“We are putting partisanship aside, and we are going to show the rest of the state that it’s time for a change in Middlesex County,” said the Democrats’ gubernatorial nominee. 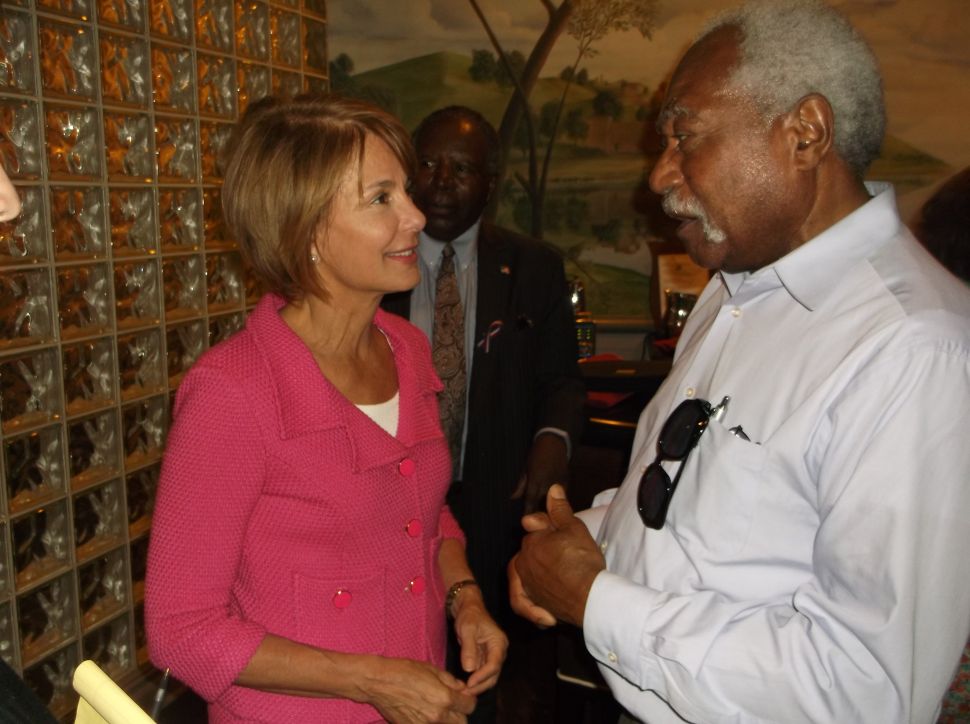