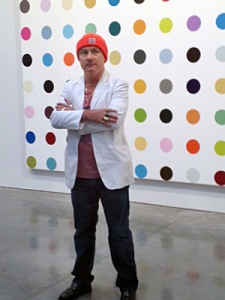 Carmelo Anthony talks about his art collection, and Swizz Beatz discusses working with Damien Hirst: “He’s a brilliant man, and he’s got a lot of brilliant stuff coming. I am happy to be his student. To say that I am a student of Damien Hirst is like, I can retire.” [Page Six]

Tony Feher on his traveling retrospective, which is now at the at the deCordova Sculpture Park and Museum in Lincoln, Mass. [Artforum]

More Hirst! “After abruptly dumping Larry Gagosian last year, the UK’s richest artist Damien Hirst has invested in art auction Web site, Paddle8. Others who’ve joined the site’s latest $6 million round of financing include Alexander von Furstenberg, White Cube gallerist Jay Jopling and Matthew Mellon. With the cash infusion, the site’s aiming to expand into collectibles such as jewelry, and will open LA and London offices. The Paddle8 site was launched by co-founders Aditya Julka and Alexander Gilkes, with COO Osman Khan, in 2011.” [Page Six]

“The Dan Flavin Estate has quietly reversed its position on the production of posthumous versions of the artist’s fluorescent light sculptures.” [The Art Newspaper]