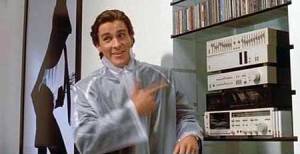 Kanye West reportedly wanted James Franco to star in an upcoming music video that includes an adaptation of that scene in American Psycho where Christian Bale listens to Huey Lewis and the News and murders someone. Instead a friend of Kim Kardashian is taking on the role. (Mr. Franco, of course, figures in a show called “Psycho Nacirema,” organized by Douglas Gordon at Pace London.) [Page Six]

Scott Reyburn names prices on some of the biggest-ticket items on view at Art Basel. [Bloomberg]

Here are some pictures of David Shrigley’s monument to Bubbles the Chimp. [The Art Newspaper]

The illustration market is “hot.” [WSJ via AMM]

On Jack Goldstein: “Goldstein and Mr. Fischl were both ambitious graduates of Cal Arts who came to New York at about the same time. And yet one became a casualty, the other a celebrity.” [WSJ]

Feds have seized an estimated $100 million in art over the last two years from dealer Subhash Kapoor, who awaits trial in India. [Los Angeles Times]