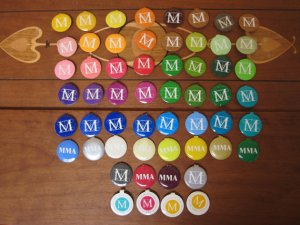 After 42 years, the Met will stop providing visitors with tin buttons, citing rising expenses and the ease of a new sticker system. [NYT]

Patrick Cariou says that he will press on in his fight over Richard Prince’s use of his photos in his “Canal Zone” paintings, taking the fight to the Supreme Court. [TAN]

Dia will sell works to raise money for acquisition fund. [Inside Art/NYT]

Here’s a detailed preview of Thomas Hirschhorn’s Gramsci Monument in the New York Daily News. Not to be a dick but they misspell “Gramsci” at one point. [NYDN]

A watch designed by Andy Warhol is for sale from Solmo Antiques at the Masterpiece London fair this weekend. [Bloomberg]