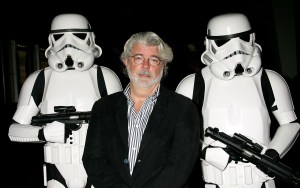 George Lucas might build a museum to house his collection. [Flavorwire]

Here’s a profile of “hedge fund nomad” Kashya Hildebrand, who became a Geneva–based art dealer after quitting finance in 2000. She just moved her gallery to London. [Bloomberg]

German police say they uncovered an art forgery ring, whose work included Kandinskys, Maleviches and Goncharovas. The group was based in Germany, Israel and Switzerland. [Artforum]

The director of Russia’s Perm Museum of Contemporary Art has been fired. [The Art Newspaper]

The emir of Qatar hands power off to his son. [NYT]

A piece on artist Hope Gangloff, who paints Cooper Union protestors, who are still occupying the seventh floor of the Foundation Building. [Bomb Magazine]

Some people in Los Angeles want to lift the ban on private-property murals. [Los Angeles Times]