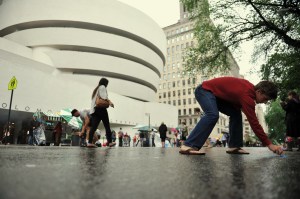 Tonight, from 6 to 9 p.m., seven museums along Museum Mile, on Fifth Avenue between 82nd and 105th Streets, will be free and open to the public as part of the annual Museum Mile Festival.

The institutions offering free admission are:

Not every Museum Mile institution is participating. The Cooper-Hewitt is closed for renovations. The Goethe-Institut/the German Cultural Center is currently housed in an interim location downtown. And the 10th, and newest, member of the Museum Mile club, the Museum for African Art, has not yet opened in its new building at the north end of the stretch.

Fifth Avenue will also be closed to traffic during the festival, and the museum’s have some special programming planned. Take a look at the full lineup of events here.

Not exactly Art Basel, but not bad, right?

Update, 12:20 p.m.: Really thrilled to be able to report that Café Sabarsky, Neue Galerie’s redoubtable restaurant, which is typically closed on Tuesday evenings, will be open for coffee, dessert and drinks tonight.