Both at the time of his scandal and now during his political comeback attempt, the New York Post has simply reveled in making pun after pun with Anthony Weiner’s last name. But don’t expect any apologies.

Asked what he’d say to critics who have accused his publication of being immature, Post editor in chief Col Allan bluntly told the Australian news program Lateline, “I don’t know. They got to develop a sense of humor, I guess.”

The Australian-born Mr. Allan also presented his favorite innuendo-filled headlines to the show, which recently ran a segment on Mr. Weiner’s unlikely bid.

“‘Hide the Weiner.’ How could you not love it?” he asked as a staffer scrolled through various Weiner covers. “I like that one, ‘Fall on Your Sword, Weiner’ … ‘Stick It Out,’ you like that one? ‘Weiner: I’ll Stick It Out.'”

Mr. Allan, who answered, “I hope so,” when asked whether his headlines “go too far,” further mused on the importance of holding Mr. Weiner accountable for the sexting scandal that ruined his congressional career two years ago.

“He has some sort of fascination with himself,” said Mr. Allan. “I think then to lie about it in the fashion that he did really is about his character. As long as he’s in any kind of public life, it’s going to dog him.”

Mr. Weiner also discussed his own candidacy with Lateline, telling their reporter that he was confident his mayoral campaign would succeed despite the controversy.

“Yes. If I knew some kind of Australian expression,” Mr. Weiner said, his voice trailing off before offering a possible expression from Down Under. “Dead on!” 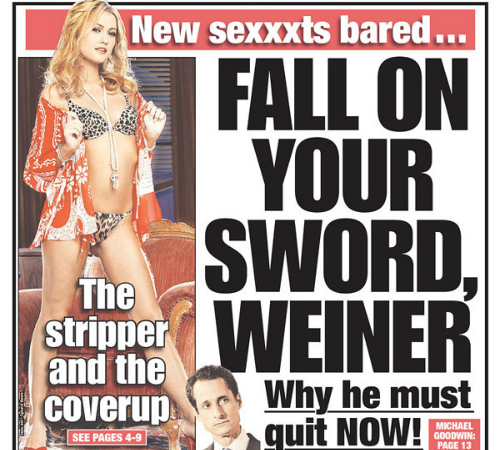