One New Yorker has taken the trouble to record a song about Brooklyn’s most hated subway line–the G train–and it blows the TWU’s subway safety PSA right out of the .

In his tribute to the much-maligned G, musical comedian and apparent crummy-train enthusiast Rob Paravonian calls the line a bastion of “originality,” not for the “idiot herd.”

“People laugh and say that it should try to go somewhere,” he sings. “But the G train does its own thing, it doesn’t really care.”

He also dismisses common G train complaints like, “the G train takes forever to show,” “it’s half the size of the other trains,” and “the G train doesn’t even go to the city,” in clever rhyming couplets, and points out that “girls are cuter” on the G, and “it’s like a dive bar on wheels” (this is true). He fails to address the omnipresent smell of urine, however.

Mr. Paravonian even bothered getting an exterior shot of every single stop. Factoring in a wait time of approximately two hours between trains (fairly standard for the G), that means it took him at least 42 hours to make this three-minute video. Now that’s dedication.

There’s a subway line that all of the time everybody’s always mockin’
But that’s just the words of the idiot herd ‘cause I think it’s pretty rockin’
You’d realize that if you prized individuality
This particular line is one of a kind, there ain’t nothing like the G

People laugh and say that it should try to go somewhere
But the G train does its own thing, it doesn’t really care

(Oh wait, thought it was coming there for a second
Guess we gotta wait on the platform
That’s alright, that’s alright.)

“The G train takes forever to show!”
That means it’s just reclusive
“But it’s half the size of the other trains!”
That just makes it exclusive
“The G train is just too darn slow
When’s it gonna come?”
Psh, you don’t know
“The G train doesn’t even go to the city!”
No Bridge-and-Tunnel crowd? What a pity!

If the G train doesn’t go there, it’s no place that I wanna be
You can have those main lines, I’ll keep ridin’ on the G

(That’s right, this is artisanal transit right here
Each ride is unique
Know what I’m sayin’?)

They say the G train goes nowhere, well I’ve got to beg your pardon
Greenpoint, Gowanus, Fort Greene, Bedford-Stuy and Carroll Gardens
The G train will get you there, though it might take a while
But when you finally get there, you’re someplace that’s got style 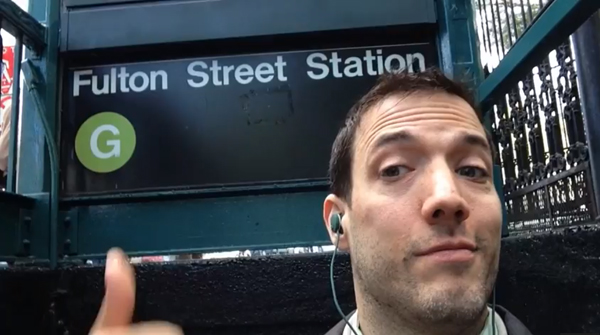