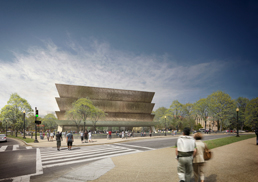 The Smithsonian’s still-under construction National Museum of African American History and Culture announced that Oprah has given the institution $12 million.

From the New York Times:

“This gift helps us get to the finishing line in terms of construction,” said Lonnie G. Bunch III, the museum’s director, in an interview. “Oprah has also given her imprimatur and that helps with fundraising and visibility.”

So far, the museum has raised $335 million toward the $500 million cost of design, construction and exhibitions, including $145 million from private sources, he said.

The museum is set to open in 2015 next to the Washington Monument on the National Mall. According to The Times, the museum’s 350-seat theater will be named the Oprah Winfrey Theater.