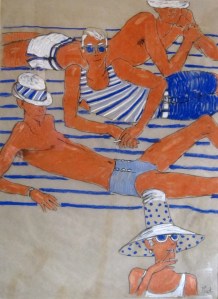 Sandwiched between the two former American Fine Arts spaces on Wooster Street, the Leslie-Lohman Museum of Gay and Lesbian Art has as its mission “provid[ing] an outlet for art work that is unambiguously gay and which is frequently denied access to mainstream venues.” The new museum’s program is off to a strong start with an exhibition dedicated to the cult artist Paul Thek that highlights Thek’s early work, from his figurative drawings of the mid-1950s up through his 1967 glass-encased “Meat Pieces.” Or, as the show’s wall text inimitably puts it: “His early work, arguably the gayest in his entire career.” “Paul Thek and His Circle in the 1950s,” curated by Thek’s friend and first love, set designer Peter Harvey, in collaboration with art historian and activist Jonathan David Katz, makes a case for bringing to light pieces that were largely omitted from the artist’s otherwise spectacular 2010 Whitney Museum retrospective.

The Leslie-Lohman show draws a parallel between Thek’s mature work, which has been described as inserting the figure and the body into the cool geometry of minimalism, and the relatively openly gay identity his circle embraced. His work would inspire post-minimalism’s often-political explorations of the body and the self.

Thek, who died of AIDS in 1988, was born in Brooklyn and educated at the Cooper Union. His name is already on your bookshelf as the person to whom Susan Sontag dedicated Against Interpretation. The earliest work in the show is a 1953 etching, Still Life, which reimagines Adam and Eve as Adam and Adam, two naked men standing next to a tree. It is lovely, slight, sepia-toned. In 1954, when he was 21, Thek met Mr. Harvey in Miami. In photographs included here, the two young men are beautiful: all Paul Bowles suits, coiffed sandy blond hair, button-down shirts and tanned thighs. Photos and letters track them through New York and Nantucket, where they join forces with Peter Hujar, then a budding photographer. Thek’s 1963 Portrait of Peter Hujar, a monochrome canvas depicting Hujar’s features in a grid of cigarette-dragging, eyebrow-raising postures is intimate, but also dizzying in its scientific magnification of its model’s every gesture. Hujar, who died in 1987, returned the favor by capturing Thek over decades of his life in photographs that are on display here, including in the splendid 1965 gelatin silver print Paul Thek Nude, Astride Zebra.

Thek made a good model—he was mop-haired, rakish and cool. His drawings of his own lovers are slight, homoerotic and elegant, not unlike the fashion illustrations and textile designs he would contribute as an employee in the studio of Jack Prince. It’s easy to forget his mature work until you encounter the sculptures at the end of the show, like Untitled #75 (1964), a wax and Plexiglas slab of pure, visceral sculpture. The wax is modeled into a gloopy, unpleasantly human-looking chunk of flesh, and encased in a solid-looking Plexi case. These biomorphic works, which Thek often cast from his own body, come decades before artists like Damien Hirst would attempt riffs on mortifying flesh. Thek’s brilliant sculptures, which he called “Technological Reliquaries,” (1964–67), meditate on the status of flesh in the modern age. He uses meat as decoration, and the results speak to the reliquary nature of his cultural Catholicism, but also to the politics haloing contemporary bodies. On view is also a great Thek drawing in pencil of an arthropod’s jointed leg: magnified, spiky and eerily human.

Groups form around common interests and, often, a shared sense of estrangement. Here, Thek’s circle looks so utopian—friends garlanded in flowers on Nantucket, casual in khakis on Fire Island—that what happens in the 1970s is jarring. Theodore Newman kills himself. Another man is beaten to death. In New York before Stonewall, Thek’s was an out “scene” in a closeted era. That its politics and aesthetics supported and inspired the young artist seems more than plausible.

Thek’s life was cut short, but it is invigorating to see these exhibits dedicated to his legacy in the past few years—perhaps the teens are his decade. This show is small, but its story, told through work by Thek, Hujar, Harvey, Joe Raffael and others, is resonant. With its mandate to take in collections of explicitly gay artwork otherwise abandoned or rejected by deceased artists’ families, the Leslie-Lohman Museum promises to be a repository of objects with many more stories to tell. (Through July 7, 2013)