I found out James Gandolfini died while I was commuting home on NJTransit from New York to Asbury Park. When I got off the train, I heard more than one person greet their ride with, “Did you hear? Tony Soprano died.”

Later, flying down the Parkway, I saw a photo of Mr. Gandolfini on the Asbury boardwalk. It was sunny and he was smiling, right down the street from my house, with Convention Hall in the background.

I was already sad, but that was when I lost it. To my surprise, I couldn’t stop crying. I felt like Tony blubbering over “his” family of ducks in Dr. Melfi’s office in the pilot episode. His death was significant to me, but I couldn’t understand why, apart from the fact that he starred in my favorite TV show of all time.

My boyfriend asked me why I was so upset. All I could muster was, “James Gandolfini. I don’t know. New Jersey?”

Growing up in the Garden State, you learn at a young age that people from the rest of the country look down on you. Your grandma will insist it’s because they’re prejudiced against Italians, Jews, Irish — whatever your family is. But it doesn’t bother you too much. You like your home state and you’re pretty sure there’s a lot more going on in Jersey than there is in, say, Idaho, or even Delaware.

It’s when you leave New Jersey that it becomes an issue. We’ve all been to the Williamsburg roof party where the simple sentence, “I live in New Jersey,” sends fellow revelers shuffling away with apologetic smiles on their faces. Then, there’s the classic Californian attempting a Jersey accent, or yet another “What exit?”

Still, warts and all, something about the show made me proud of my state. I’m not a middle-aged Mafioso, and I didn’t grow up on chicken parm. But I know plenty of people who walk, talk and dress like the Sopranos. I actually watch the show when I miss home.

This has everything to do with Mr. Gandolfini, a total Jersey guy who made it to the big time without having to disavow his roots. Whether he was playing Tony Soprano or the Secretary of Defense in Zero Dark Thirty or an imaginary monster in Where the While Things Are, or the lieutenant general in the hilarious In The Loop, he embodied a particular gruff, unvarnished, blue-collar and above all Jersey charm that you don’t often find in Hollywood.

Mr. Gandolfini went to Rutgers University, which is also my alma mater and my dad’s. A family friend, Tom Richards, was in the same class as Mr. Gandolfini from 1980 to 1984. Mr. Gandolfini was a “super nice guy, cordial,” Mr. Richards said, and not the stereotypical hammy actor — “nothing overtly special, not over-the-top, but not a wallflower.”

In those days at Rutgers, the legendary Greasy Tony’s was still open and pitchers of beer cost three dollars. The Grease Trucks have now usurped Greasy Tony’s and beer is slightly pricier, but one thing is still the same: despite the great education Rutgers offers, it’s a second-choice school for most students.

I spent the first day or two at Rutgers bonding with my fellow students about what schools we were supposed to be attending (mine was Fordham). Mr. Richards says Rutgers was the same way back then. He was enrolled at the same time as not only Mr. Gandolfini, but also Calista Flockhart, Kristin Davis, Jane Krakowski and Matt Pinfield. Not too bad for a universal safety school in a state everyone’s supposed to want to leave as soon as possible.

Scores more bold-faced names hail from New Jersey, but when you think of people like Meryl Street (Summit), or Anne Hathaway (Millburn), or Martha Stewart (Nutley), Jersey doesn’t usually come to mind. But Mr. Gandolfini, like Bruce Springsteen, reminded young New Jerseyans that having a Jersey accent didn’t relegate them to taking over the family business and staying in Bergen, Hudson or Monmouth County forever.

Even after he did make it, Mr. Gandolfini didn’t stray far. He lived in New York City, but his sister had a house in Mantoloking, right next to where I grew up in Bay Head. It was heavily damaged in Hurricane Sandy, as was every other house in town.

Mr. Gandolfini visited the area a lot. In high school, my sister served him Italian subs at Jersey Mike’s and my best friend sold him a milkshake at Hoffman’s, but he looked so much like all the other middle-aged men coming through the area each summer, nobody could’ve blamed you for not realizing he was a star.

“When you look at him, you don’t see a leading man,” Mr. Richards said. “I loved The Sopranos because to those of us who have lived on the Jersey Shore, it rings true.”


Mr. Gandolfini’s and the other actors’ authentic Jersey looks and mannerisms — yes, we have our own mannerisms — are what made the show work in a way that wasn’t offensive to New Jerseyans. We were laughing with the Sopranos, not at them. The show was a product of our state that was at once artful and unquestionably, unapologetically Jersey. On a trip to Scotland, I found myself beaming when I told people I was from New Jersey and they excitedly responded, “Like ‘The Sopranos’?”

For all the glory Mr. Gandolfini’s turn as Tony Soprano brought to our state, The Sopranos may have been partly responsible for the inexplicably booming Jersey reality genre — Mob Wives, Real Housewives of New Jersey, Jerseylicious, and most painfully, Jersey Shore.

Mr. Gandolfini’s death is eerily reminiscent of that last scene in the last episode of The Sopranos — the infamous blackout shot. Some fans were enraged and thought the ending was a cop-out, but I thought it signified the fact that despite the violence, the Sopranos’ lives were actually as mundane and family-oriented as anyone else’s, and would keep rolling on whether we were watching or not.

Mr. Gandolfini’s life ended just as abruptly, but his legacy as the quintessential Jersey guy will continue. The character he helped create not only changed television, but also showed legions of Jersey people that you may not have to drop the accent or pretend you’re from Pennsylvania to be respected by the rest of America.

It’s sad to see him go. But to deal with it, I’ll try to take his advice. He’s quoted in a Philadelphia Daily News story from December. Visiting a post-Sandy Christmas party with his sister in the Mantoloking firehouse, he said, “Hey, listen, we’ll bounce back. This is New Jersey. We’re pretty tough here.” 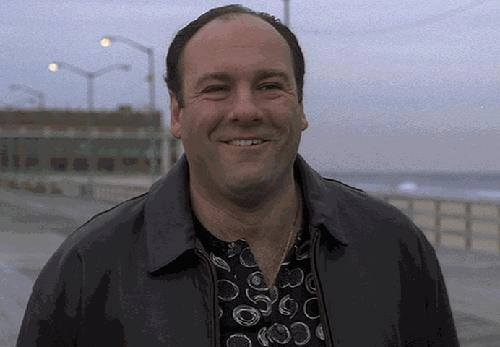